Synopsis: A quest that begins as a personal vendetta for the fierce Cimmerian warrior soon turns into an epic battle against hulking rivals, horrific monsters, and impossible odds, as Conan realizes he is the only hope of saving the great nations of Hyboria from an encroaching reign of supernatural evil.

Forget the literary origins of this sword-and-sorcery epic- since Arnold Schwarzenegger immortalised the character on the big screen in John Milius’ cult classic back in 1982, the warrior from the ancient land of Cimmeria has secured its place in pop culture as a symbol of pure unfettered masculinity. But while Milius at least made an attempt to give the muscle-bound warrior gravity with some back story and purpose with a narrative quest, music video director Marcus Nispel in this latest reincarnation is simply content to let the character slay and slay some more.

Indeed, whatever dignity the voice of Morgan Freeman may have imbued in the film with his opening narration is quickly lost when the movie opens in the heat of battle and a grizzled Corin (Ron Perlman) slitting the womb of his wife to deliver his son who would be Conan. Nispel is single-minded- and unapologetically so- in making his film pulpy and downright trashy, so you’d be wasting your time trying to criticise it for the laughable dialogue, the simplistic plot, and the nonexistent character development. These are none of his concern, and neither should they be yours if you’re determined to enjoy this movie.

Instead, sit back and let your brains have a rest as screenwriters Thomas Dean Donnelly, Joshua Oppenheimer and Sean Hood take you through an extended prologue that follows the 1982 film by setting Conan up to avenge the death of his father and proving himself worthy of the sword he wields. There is some other plot about said murderer Khalar Zym (Stephen Lang) who is looking to restore the parts of a powerful ancient mask in order to resurrect his dead wife and gain control over the universe, but really it’s no more of an excuse to get Conan from point A to B and start his beheading all over again.

Speaking of action, there’s no doubt that the film is packed wall to wall with it. Yes, Nispel doesn’t allow more than five minutes in between each action sequence- and why not, Conan is after all a character who speaks with his actions, not with his words. Unfortunately, besides one halfway through the movie that sees Conan fighting against a band of shape-shifting sand warriors and the climactic sequence set within an underground fortress, there is little that impresses along the way.

Notwithstanding the uninspired fight choreography and Nispel’s inability to sustain excitement through extended action sequences, what’s most disappointing here is in fact Thomas Kloss’ cinematography whose messy shot composition throughout the film is an unmitigated distraction to the action on display- and we’d shudder to think of how our fellow audiences in the United States would watch it post-converted in 3D. Kloss also doesn’t do justice to the magnificent CGI vistas which production designer Chris August has created for the film, glossing over them with no more than an opening wide shot of each of the beautiful landscapes.

Still, it is likely that female audiences will be satisfied with the number of lingering shots over Jason Momoa’s rippling bod. Unlike Schwarzenegger, Momoa comes off less of a brute than a cunning deadly predator, and the change is a welcome improvement for a more savvy generation of viewers. Nonetheless, the script doesn’t trust him or his character with much dialogue or depth, and his Conan doesn’t go deeper than the archetype of a fearless warrior. Other characters don’t fare much better- whether go-to villain Stephen Lang’s badass warlord, Rose McGowan’s evil witch or Rachel Nichols’ princess maiden- so don’t bother looking for any of the other actors and actresses to do any serious acting.

But as we’ve said, that really was never the point of Marcus Nispel’s film, one which celebrates unabashedly its B-movie pedigree by sticking religiously to it. Sure, it is violent (yes, be prepared for multiple decapitations), loud, shallow, and quite probably dumb- but you can’t fault a movie for being all these things when it wanted to be all that and engage its audience purely on a visceral level. If you’re prepared for all that, and some brainless numbing gory action entertainment, then ‘Conan’ will satisfy your bloodlust for action- less so the lust though since a key sexual scene between Conan and Nichols’ Princess Tamara has been snipped off very obviously from this edited M18 version.

(Loud, violent, shallow and dumb- this ‘Conan’ is content to be no more than a glorified B-action movie) 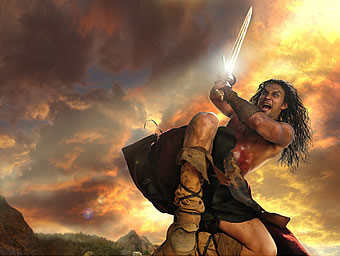 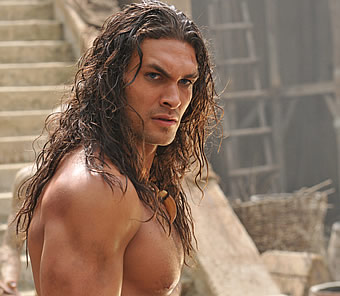