Synopsis: "Captain America: The First Avenger" will focus on the early days of the Marvel Universe when Steve Rogers (Chris Evans) volunteers to participate in an experimental program that turns him into the Super Soldier known as Captain America. As Captain America, Rogers joins forces with Bucky Barnes (Sebastian Stan) and Peggy Carter (Hayley Atwell) to wage war on the evil HYDRA organization, led by the villainous Red Skull (Hugo Weaving.). Movie Review:

The last of Marvel Comics’ superheroes to make its big screen debut before next year’s hotly anticipated ‘The Avengers’ was also the first to debut on print some 70 years ago in Joe Simon and Jack Kirby’s Super Soldier series. Captain America was his name, his appearance at the time when the world was in the throes of World War II- though it would be months later before America finally decided to join in the fight following the bombing of Pearl Harbour.

You’d understand why then the character was created as a square-jawed, well-chiselled, honourable man with almost zero flaws- the world needed a hero in the truest sense of the word and Captain America fit that profile to a T. In adapting the comic character, writers Christopher Markus and Stephen McFeely (of the ‘Narnia’ franchise) have wisely opted not to distort the wholesome hero Captain America has been known to be, and this is precisely why their film stands out tall and strong against the plethora of superhero flicks in recent years.

Indeed, moral ambiguity has become de rigueur for the modern-day superhero since the likes of ‘The Dark Knight’, so much so that the simplicity of old-fashioned true-blue heroism is in fact quite refreshing. And other than his physical build, Steve Rogers is no less than the perfect hero- his only wish is to enlist in the war to do his part for his nation, and he’s not afraid to fight back even when faced with an opponent bigger and stronger than he is. Rogers is finally granted his wish- after numerous unsuccessful interviews- when he meets German defector Dr. Abraham Erskine (the excellent Stanley Tucci), who recruits him as part of the US Army’s plan to create super-soldiers.

Needless to say, Rogers is eventually chosen among the candidates- the choice, as Dr Erskine explains to him,  is because ‘a strong man who has known power all his life may lose respect for that power; but a weak man knows the value of strength and knows compassion’. An agonising serum injection later, Rogers is transformed into the buff and muscular Captain America- his newfound powers quickly put to the test when he sets off down the streets of Manhattan barefoot in hot pursuit of a German spy who assassinates Dr Erskine just minutes after the experiment.

That spy is in fact under the service of renegade officer Johann Schmidt (The Matrix’s Hugo Weaving in another expert villain role), the leader of the Nazis’ occult research arm HYDRA building his own personal army for world domination. Schmidt is a fine nemesis to Captain America, the very antithesis of the latter’s red-white-and-blue goodness and very definition of the word ‘evil’. If the film draws Captain America as the equivalent of pure heroism, then so must it also paint Schmidt as the equivalent of complete evil.

But before the two go up against each other, Captain America must first overcome the politics of war, as he is quickly placed in a blue costume and made to perform on stage as an All-American hero to urge the public to buy war bonds and hence raise money for the war effort. Director Joe Johnston has plenty of satirical fun playing up the overt patriotism of these acts, presenting them in a montage that sees Captain America perform across different states but with the same act which includes a fake German Nazi. This detour into media celebrity also sees the film at its most grounded, as Captain America becomes a larger-than-life symbol used as a morale booster for the public.

He finally springs into action when he learns that his buddy Bucky Barnes (Sebastian Stan) has been taken prisoner by HYDRA, and despite warnings from his former commanding officer, Colonel Chester Phillips (Tommy Lee Jones), decides to go deep into enemy territory to rescue him and other prisoners-of-war. It is there he realises the extent of Schmidt’s nefarious plans, the rest of the movie a non-stop thrill-ride as Captain America assembles his army to clean out Schmidt’s bases one by one leading up to that final confrontation between the two.

Yes, it takes an hour before the action kicks in proper, but Johnston makes the wait absolutely worth it. Johnston has demonstrated his penchant for visual effects, and his abilities are plainly evident in the film’s action set-pieces- beginning with a daring raid to rescue the POWs, followed by a sneak attack on Schmidt on board a moving train, and culminating in a climactic showdown set inside Schmidt’s underground lair as well as around and in his fighter jet. There is unadulterated exhilaration to be had here, and the film’s infectiously jaunty spirit adds immensely to the sheer enjoyment.

So too do the film’s supporting players, featuring a bevy of ensemble actors. Tommy Lee Jones is pitch-perfect as the surly Colonel, at first doubtful of Captain America’s abilities and later a fine sidekick aiding the hero on his mission. The veteran actor nails every one of Markus and McFeely’s witty dialogue, and it’s hard to imagine another actor pulling off punchlines like ‘If you have something to say, now is a perfect time to keep it to yourself’ with the same gruff charisma. Other notable supporting cast members include Dominic Cooper as Howard Stark, the father of future ‘Iron Man’ character Tony Stark; Toby Jones as Schmidt’s right-hand man; and Derek Luke, Neal McDonough and Ken Choi as fellow soldiers on Captain America’s team.

Deserving of special mention is British actress Hayley Atwell, who plays her character with the right amount of passion and tenacity to convince as both our hero’s love interest and Army supervisor. Atwell nails the emotional finish beautifully, and there will certainly be those left with a teary eye by the time the final exchange between her and Captain America is over. There is also real chemistry between Atwell and Chris Evans who plays the titular character. This is Evans’ fifth outing in a live-action superhero movie, and the actor delivers his most sincere performance that is perfectly in line with his character.

Of course given the period setting, there is a need to bring our hero to the present to join with the other members of S.H.I.E.L.D. including their team leader Nick Fury (Samuel L. Jackson in yet another cameo)- but kudos to both the screenwriting team of Markus and McFeely as well as director Johnston for keeping this adaptation true to the old pop culture motif that Captain America was. Whereas modern-day superheroes tend to be less clearly defined in terms of black and white or should we say good and evil, this old-school hero is a perfect nostalgic emblem of heroism. That and the fact that this movie is also mighty entertaining is just the perfect finish to this summer’s superhero bombast, and a run-up par excellence to next summer’s ‘The Avengers’.

(This old-school good-vs-evil superhero fable is an excellent throwback to the straightforward heroism of the past, and a mightily entertaining blockbuster with great humour and loads of thrilling action) 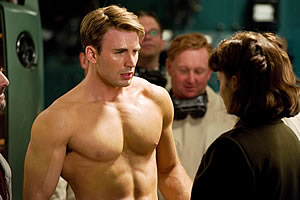 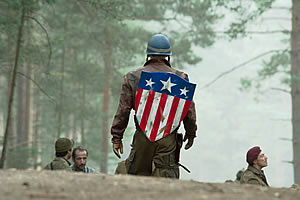 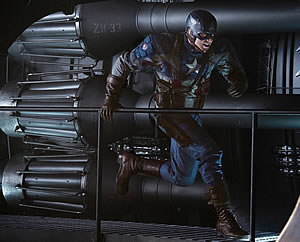 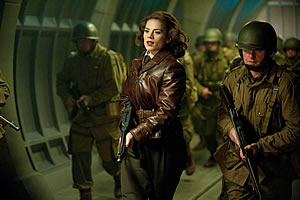 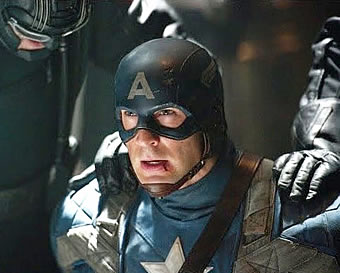 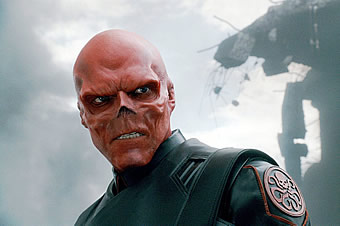 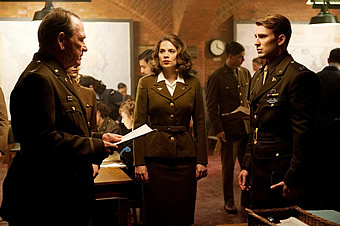 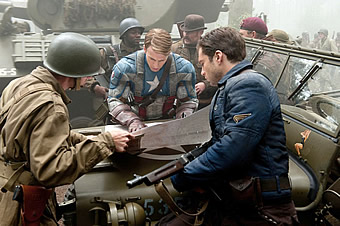 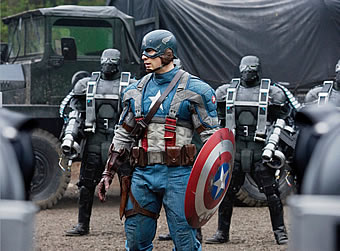