Synopsis: The story takes place in an ancient mountain village.  There were spirits and tree monsters living on Black Mountain and these demons were always engaged in slaughter and bloodshed.  The villagers all fear to enter the mountain and the Lan Ruo temple within the mountain.

When Yan Chi Xia was still young, he chose Black Mountain to practice and realize his dreams of becoming a good Demon Hunter.  He experienced many dangerous battles with demons in Black Mountain.  His sword became more fearful, and he gets more powerful and confident as he overcomes all the spirits and monsters until the day he met her and their sad story begins.

Many years later, when the river at the base of Black Mountain dried up, the villagers made the decision to search for a water source on the mountain.  Humans, ancient spirits and tree monsters enter into conflict.  From there, another romantic legend emerges …

The Tsui Hark production “A Chinese Ghost Story” is without a doubt a seminal classic of Hong Kong cinema, successfully blending some of its signature elements like over-the-top action, overwrought emotions and a dizzying mix of various genres- in this instance, romance, comedy and horror. It is a tall task then to attempt a reinterpretation of it, but “Ip Man” director Wilson Yip has boldly attempted to go where no Hong Kong director has dared to tread.

It seems however that this reluctance has been for good reason- despite Yip’s efforts at mimicking the hallmarks of the earlier film, his 2011 remake is a slapdash product with little actual merit. The ineptness of Yip’s version is indeed appalling- especially considering his solid, if not outstanding, work on the two “Ip Man” movies- and in almost every respect proves to be inferior to Ching Siu-Tung’s original. That is, except for its end credits- and only because it rehases the late Leslie Cheung’s classic theme song.

Right from the beginning, one can sense that there is something amiss with the movie. A hastily-told prologue tries to establish- but fails to do so with any resonance- the doomed romance between demon slayer Yan Chi Xia (Louis Koo) and Nip Siu-Sin, or Xiao Qian (Liu Yifei) as she is more popularly known. Apparently, Cia Xia didn’t have the heart to kill Siu-Sin when the time came for him to do so- instead, he erased her memory of their relationship and set her free, thereby also falling out with another demon slayer Thunder (played by Ip Man regular Fan Siu-Wong).

Fans of the original would already suspect the difference between the two, and true enough, the focus of Yip’s movie seems to have shifted to the character of Chi Xia- in the process, setting up Leslie Cheung’s Ning Cai Chen (played here by the terrible Chinese actor Yu Shaoqun) as a romantic rival instead to Chi Xia for Siu-Sin’s affections. Cheung’s classic character turns out to be the scholar a water-impoverished town turns to for assistance, and it is to solve their water woes that Cai Chen ventures into the mountains, meets Siu-Sin and lands up at Lan Tze Temple.

As with the original, the trio’s common enemy is the Tree Demon, to whom Siu-Sin’s spirit is enslaved to and with whom Chi Xia and Cai Chen will eventually battle against in a CG-heavy action-packed finale. The latter has Yip demonstrating the sure hand he had with the action sequences in “Ip Man”, and is easily the best thing the movie has going for it. Complementing the fluid martial arts choreography (among the choreographers veteran Ma Yuk-Shing) is the impressive visual effects- done post-production in Korea- which only goes to show that the China film industry can very well handle CG as competently as its Hollywood counterparts.

Unfortunately, the hour before this climactic battle is one tedious slog, no thanks to a dreadful script by Cheung Tan (also equally guilty for the Chen Kaige dud ‘The Promise’). Not only is the dialogue god-awful and filled with moments of unintentional humour, there is close to little characterisation- be it Chi Xia, Cai Chen, or Sui-Sin. Yip compensates for Cheung’s bad scripting with a somewhat frenetic pace, but that’s not enough to distract his audience from its flaws and repetitive scenes. Most importantly, the romantic triangle also fails to take off, and remains stuck in cutesy scenes (what’s up with the feeding of sweets) that belong in a teenage fantasy. And because one never quite comes to believe in the star-crossed romance between human and demon, the finale also lacks the poignancy of the original.

Equally uninspired is the acting- or rather, the lack of it- on display. Louis Koo attempts to emote as one half in an ill-fated romance, but doesn’t quite succeed. Yifei has the beguiling looks to go with her part, but lacks conviction. But the worst of the lot is Mainland actor Yu Shaoqun, who proves time and time again that he simply cannot act (if you’ve seen last year’s Kung Fu Wing Chun, you’ll agree too). His portrayal of the shy soft-spoken and good-hearted romantic lover is simply ingratiating and an utter insult to Leslie Cheung’s nuanced performance. Ditto for Louis and Yifei, whose acting can’t hold a candle to Wu Ma and Joey Wong’s in the original.

There are however exceptions- Kara Hui is gleefully campy as the Tree Demon, while Elvis Tsui, who also starred in the original, offers some welcome comic relief as the chief of the village Cai Chen visits. Yet these are little consolation for a movie that never justifies its existence, paling in every respect to Ching Siu-Tong’s classic. And the horror of it all? The filmmakers had the audacity to think that their efforts were worthy enough for them to dedicate this film to the late Leslie Cheung!

(The CG effects are impressive- but in all other respects, this is a wholly unnecessary remake that is inferior to Tsui Hark’s original) 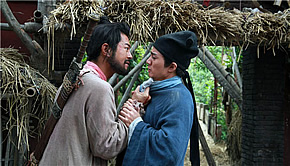 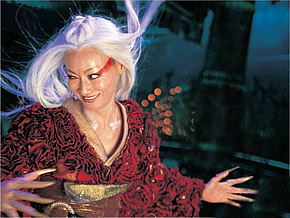 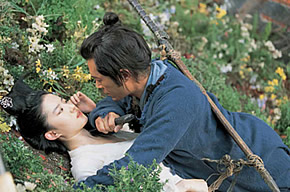