Synopsis:  After his recovery and realization of his mistakes, Ken returns to Tekong Island to continue his Basic Military Training (BMT). Determined to change, Ken prepares to prove himself. However, this change in attitude from Ken, immediately draws the dislike and mockery from some his Section mates led by Lobang. They feel that he is following after Wayang King’s footsteps, just trying to flatter the commanders so that he can stand out. Ken tries to explain but to no avail. Instead, their misunderstandings deepen as the training continues.

At the same time, Ip Man’s girlfriend left him for another guy. Unable to contain his anger, Ip Man seeks help from Lobang & his Section mates to hatch a plan for revenge on his ex-girlfriend and her new boyfriend. The new boyfriend immediately informs his gang, and quickly locate Lobang and the Section mates at their usual place where they will have dinner before booking in. A fight broke out. Wayang King was the first to escape, while Ken hesitated, but eventually stayed behind to defend his Section mates. When questioned by the Commanders, Ken defended his actions because he learned that he should “Leave no man behind” and can’t just run away.

Seeing his Section mates being beaten up, is he wrong to go through thick and thin with them? After this incident, what else is in store for Ken? What punishment will be met out because of the fight? How will the antagonisms between Ken, Wayang King, Lobang and the rest of the Section mates be resolved? In such an environment of mutual distrust and sabotage, will they be able to shake hands and work together, to face their greatest challenge?

If the first part of the ‘Ah Boys to Men’ duology could be accused of placing its focus too narrowly on just one character – or more accurately, recruit – then this concluding part restores that balance between the various other characters / recruits by giving each his due. Now that lead protagonist Ken Chow (Joshua Tan) has finally accepted his national responsibility, co-writer and director Jack Neo shifts the focus to the camaraderie of the section to which Ken is but one part of, emphasising the bond as brothers (hence the title of the theme song) that will be forged between him and his section mates during the remainder of their days in Basic Military Training (BMT).

Finding themselves with a larger share of the limelight are Aloysius (Maxi Lim) and Lobang King (Wang Weiliang), who by virtue of their attitudes towards National Service (NS) – at least at the start – are primed for conflict. While Lobang continues to look for ways to ‘keng’, Aloysius tries even harder to impress his sergeants, his over-achieving attitude alienating him from the rest of his platoon mates. Standing in the middle of this discord is Ken, who tries to placate Lobang and his other section mates to little avail.

The breaking point to the pent-up tension between Aloysius and Lobang is I P Man’s unfortunate predicament, which again happens to be a relationship issue. His girlfriend has secretly hooked up with someone else, a loutish type who openly taunts I P Man that he is in every way a better boyfriend than the latter could ever be. Not only does Aloysius refuse to participate in Lobang’s plan of revenge for I P Man, he turns hither and runs helter-skelter when Lobang and the rest of his section mates are counter-attacked, leading himself to be further ostracised when the latter group are issued with Stoppage of Leave (SOL) orders as punishment.

Neo uses the various stages of BMT training as a marker of the passage of time alongside the developing hostility between Aloysius and Lobang, so the latter’s saboteur attempts unfold against route marches, grenade throwing lessons, Battle Inoculation Courses, and outfield trainings. Similarly, their reconciliation will also be shaped through key BMT milestones - the 7-day field camp and 3-day Situational Test (SIT test) - leading up naturally to that pinnacle moment of the Passing Out Parade (POP). Is there a happily-ever ending for Ken, Aloysius, Lobang and the rest of Section 2? You betcha – perhaps more so than in any other Jack Neo movie, that affirming conclusion is exactly what hits the sweet spot.

Anyone who is passing or has passed through BMT will find someone and something to identify with the characters and scenarios in the movie, with Neo's winning formula once again proving to be his ability to tap into the psyche of every Singaporean male who has gone through that baptism of fire into NS. In particular, shifting the narrative to Aloysius and Lobang ultimately provides for more meaningful storytelling - on one end, Aloysius represents the  well-educated soldier who learns that camaraderie is just as important as knowledge; on the other, Lobang represents the street smart type who realises that taking the easy way out has its consequences on others - and there are important lessons here for real-life embodiments of both archetypes.

Compared to the first part, there is less comedy than drama - mostly from Lobang King and occasionally from one of the supporting characters - but it is a fitting change of tone as the characters mature. Unfortunately, Neo's directing skills - this is his 20th movie - isn't quite up to par with his storytelling abilities. More so than in part one, the pace of the movie feels uneven, with continuity again one of the major handicaps of Neo. The supposedly affecting scenes with Ken and his father (Richard Low), who is struggling to regain both movement and speech after a devastating stroke, feel especially out of place, even if it is meant to stress the point that it is the reason for Ken's reformation.

Neo also attempts once again to advance his craft by incorporating VFX into his movie.  Compared to a Singapore under attack in the last movie, the centrepiece here is a hypothetical battle staged with miniature weaponry right in the middle of Wisma Atria. Narrated by Aloysius' father (Chen Tianwen) to impress on him the futility of tit for tat attacks, it comes across unnecessary and superflouous. A subsequent mock battle set during the Section's BIC and another that sees their SIT assessor (played by Lee Kin Mun or better known as mr brown) pursued by a herd of wild hogs uses VFX much more judiciously and appropriately, and one hopes that Neo can come up with better excuses for using VFX despite his good intentions at pushing the possibilities of local cinema.

As for his batch of new faces, it is once again Weiliang who steals the show with his impeccable portrayal of Lobang King. The getai singer who is Wang Lei's protege doesn't overplay his Hokkien-spewing recruit act; instead he injects a rough yet down-to-earth charisma into a performance not matched by any of his co-stars. Maxi's acting as the misunderstood do-gooder is one-note, but it is still much better than Joshua Tan's, who appears even more wooden than in the first part. The rest of the supporting cast fare as well as their limited roles allow them to, but the true star of the movie here is undoubtedly Weiliang, and it will be truly interesting to see where his career goes from here.

If you had thought that the first part was a glorified PR machine for the Singapore Armed Forces (SAF), this second part will only reinforce that view. Especially through Ken's voiceover, we are supposed to better understand the various components of BMT as well as how the entire training apparently helps our young to appreciate our fine country even more. And almost as if to placate parents worried about their children's wellbeing, there is even a scene which shows the Platoon Commander punishing his sergeants for conducting rifle raids and artillery drills on the recruits - which are now apparently no longer supposed to be held. Yes, it seemed as if Neo was even more ready this time round  to make a film that the SAF would endorse, timed as it is already as a celebration of the 45th anniversary of Our Army.

But despite the politically correct stance that Neo adopts, "Ah Boys to Men 2" remains a thoroughly engaging and entertaining watch simply because it portrays a reality that is ingrained in the Singapore identity. Everyone who has gone through NS will find something familiar and nostalgic about it, and for everyone else, it offers a vicarious experience of just what it means to go through the formative and transformative years of NS. Look past the propaganda, the sometimes much-to-be-desired filmmaking and the uneven acting - at the heart of this movie still lies a perfectly relatable and therefore affecting story about the bond of brotherhood forged through the thick and thin of BMT.

(Not a perfect movie by any measure, but "Ah Boys to Men 2" still manages to tap onto the perfectly relatable and uniquely Singaporean experience of BMT for a moving portrayal of the bond of brotherhood forged through that unforgettable rite of passage) 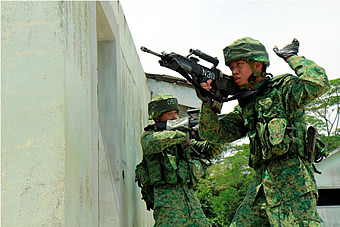 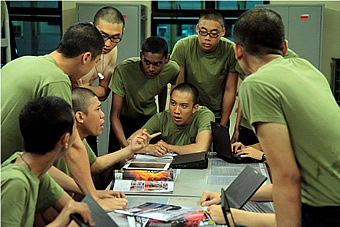