Synopsis:  The place, Yong Peng, a small town in Malaysia. The girl, Lim Ka Kiao, aka Ah Kiao. Ah Kiao sells televisions, but she wants to be on television. Ah Kiao lives and breathes Singapore-made Chinese drama serials. She knows the lines of every Channel 8 drama serial and the walls (including the ceiling) of her small spartan room are covered by entertainment magazine cut-outs of stars. Ah Kiao can’t tell Brad Pitt from Leonardo DiCaprio, but she especially loves Christopher Lee and Chen Hanwei. Because they are fellow Malaysians. This year, Ah Kiao has made a decision. She is going to join the stars. We follow Ah Kiao's journey across the causeway as she sets out to fulfill her dreams of becoming a star in Singapore, or at least getting close to them. Her adventures range from trying to become a model to becoming an extra in a TCS drama serial. Along the way, she gets side-tracked by a a handsome but shy coffeeshop helper, Ah Seng, who understands her dreams without her having to utter a single word. With local celebrities and personalities making guest appearances as themselves, Already Famous is a homegrown comedy that will appeal to anyone who's grown up watching local television. The movie also offers a rare insight into the local entertainment industry, and will have audiences everywhere rooting for the innocent and determined Ah Kiao, who unwittingly becomes the underdog in the complicated world of Showbiz. With a nuanced script and characters so realistic, Already Famous will leave you in stitches and is the Asian Underdog Made Good movie that Singaporeans (and Malaysians) will be proud to call their own. A story of hopes and dreams, seemingly light-hearted but not without moments of vulnerability and emotion, Already Famous is not just about the trials and tribulations of making it in showbiz, but also a message of truth and heart to anyone who's ever wished upon a star.

It was like a strange disease: Just a few months ago, this reviewer was religiously visiting YouTube to hunt down video clips of local TV star Michelle Chong’s impersonations of a Filipino maid, a Sarong Party Girl (more affectionately known as SPG-er) and a Mainland Chinese KTV bar hostess. Yes, if you hadn’t been living in a cave, you’d be familiar with Leticia Bongnino’s hilarious encounters with her “boi boi”, Barbarella “something something”’s stories as the president of the SPG-ers, and Lulu’s advice to Singaporeans to “hei sio hei sio” like the pandas in China. Oh, how can we forget Adrianna Wow’s pretentious newscaster’s accent?

This was how wildly successful Chong was in the weekly parody news bulletin The Noose – she got the island talking about her side splitting performances on the small screen. Viewers had to wait for seven painful days before seeing what she had in store. In the meantime, they (at least that was the case for this, err, very free columnist) could only survive on what YouTube had to offer.

So it is without a doubt that this movie is highly anticipated. Some time ago, Chong announced that she was going to take some time off to be the scriptwriter, the director, as well as the main lead for this production. Could this be the funniest local movie of the year? Would fans be hungry for more after first viewings? Are Singaporeans going to lap this up like how they tracked down Chong’s YouTube clips?

The story itself sounds promising enough: A girl from a small town in Malaysia yearns to be a TV star in Singapore. She comes to our little island against all odds and finds herself in the not so kind situation called showbiz. What’s a movie without a love story? Here, she meets a kopi boy (who somehow happens to be from Taiwan to accommodate Taiwanese host Alien Huang’s casting) and, well, sparks fly between the two. You can also bet a happy ending is in store for the girl from, of all places, Yong Peng.

Chong playing a girl with a Malaysian accent? We are sold. There are lots of potential in the movie, with sly references to the trend of actors from across the causeway enjoying success in Singapore. One would expect a commentary on local showbiz, with laugh a minute gags to have you in stitches. However, due to a probable case of mismatched expectations, the 118 minute movie wasn’t a hoot as we thought it would be.

Chong’s movie starts off earnestly enough, but eventually meanders into a predictable and sometimes directionless tale about a small town girl making it big in an unkind city. There are the occasional jokes which manage to make audiences chuckle (thanks to performances by who we assume are Chong’s good friends in the industry), but they seem somewhat incoherent and rambling in the bigger scheme of things. A likeable Huang tries his best to portray the boy next door, but ends up appearing bland and uninteresting next to his more entertaining co stars.

Watch out for appearances by a slew of familiar faces and some behind the scene celebrities. Of course, like many other local productions, expect product placement to be blatantly thrown in your face.

To be fair, viewers who are familiar with local TV would have an enjoyable time catching the crafty jokes littered throughout the movie. Gossips and scandals on Caldecott Hill, anyone? The picture would also appeal to those who have tried their hands at being an extra on a local drama serial. If we were to take a step back to empathise with their woes, we would probably appreciate this movie more.

Chong’s efforts are apparent from the decent production values of the movie, and the hard work put into producing her labour of love can be felt, which may just be the point of what the story is trying to tell us.

(Not as hilarious as one would expect it to be, this earnest production is still an enjoyable peek into what local showbiz is like) 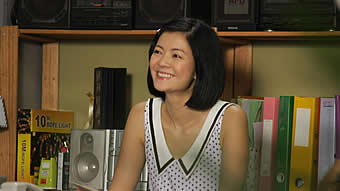 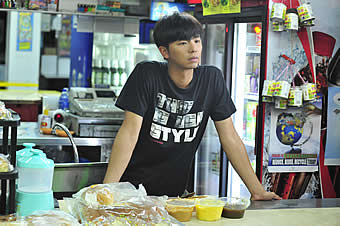