On this sunny day at the luxurious Equarius Hotel at Resorts World® Sentosa, three of this region’s superstars, Ekin Cheng, Vic Chou and Wu Chun together with Director Ronny Yu arrived for the promotional tour of their latest movie, “Saving General Yang”.

It has been seven long years since Yu’s last directorial movie, “Fearless” opened and since then, Yu had been busy assembling his generals and writing his script. According to Yu, the actors’ roles weretailored according to their real-life personalities - for example, the usually reserved Vic plays a quiet archer, and Ekin who looks like a big brother to him plays the eldest of the seven brothers. The director himself said he was delighted to see the cast members behaving like real brothers on set without the usual prima donna attitude of superstars. To him, that was already a battle half won.

The camaraderie among the stars was obvious as the trio played off each other wonderfully on stage. Below are some excerpts from the interviews with the three stars: .

“Will your wife be worried for your safety?”

That’s the first question for the newly-wedded Ekin Cheng. For the uninformed, Ekin just married fellow actress Yoyo Mung and he assured the media that the two never interfere with each other’s career choices or specific roles - not even if the particular role called for romantic scenes.

Ekin had nothing but full of praises for his co-stars. He cited veteran actor Adam Cheng (who plays their father General Yang) for being a constant mentor to the cast, frankly pointing out the dos and don’ts of dressing in period costumes. Far from being picky, said Ekin, the veteran was just trying to let his younger co-stars look better in their armours and helmets.

Ekin also shared the difficulties of handling the weaponry he used in the movie and how scared he was of riding on a horse. Being the eldest of the brothers, he had the responsibility of being cool and unfaltering on and off the camera, so imagine the added stress he faced during filming!

After 'Saving General Yang', the “Storm Riders” actor also said he has no love for period dramas - the constant changing weather in Beijing, the ridiculously heavy costumes and the long filming period away from home are some of the reasons it seems. Still, he added that he would not mind donning armour once again if the director and script was to his liking.

Vic Chou was slightly red-faced when compared as the Oriental version of Orlando Bloom.  You see, the former F4 boyband member plays the third of the brothers, a skilful, stealth archer in “Saving General Yang”. His co-star Li Cheng even joked his role was more of an ninja than general.

The usually reserved actor was especially chatty when it came to sharing his filming experiences. The funny thing was that he got to wear a lighter armour compared to his other onscreen brothers as his character had to travel light to accommodate his bow and arrow, thus incurring the envy of his fellow co-stars during filming breaks.

Vic was actually quite a joker on set according to Ekin and Wu Chun. But when probed about his love life, Vic candidly revealed he had no plans to get marry in the near future, citing financial and work-life balance as his main reasons for not settling down anytime soon. The actor from a single parent family said he feels that time and love are very important to a child and he simply would not commit just because he felt age was catching up with him.

Like Vic Chou, Wu Chun was from a boyband before moving on to a career in movies. While the handsome chap from Brunei said that had no qualms reuniting with his pop group, Fahrenheit, he expressed his desire to concentrate on his movie career for the time being. When we pointed out his more recent choices had been largely in action movies such as “14 Blades” and “Butterfly Lovers”, he was quick to point out that he is in fact open to more diverse roles and productions.

The business minded star already opened a couple of gyms back in his hometown, and although many had came to him for a franchise proposal, Chun preferred to take things slow in order to personally handle the details of the expansion (e.g. meeting up with the contractors for the décor, renovation etc).

For his role as the sixth son, Wu Chun swallowed a significant amount of sand when he had to film a fighting sequence that took more than a week to shoot. The suave actor well-known for his physique turned philosophical when the topic on hand turned to money and family.

“No amount of money can revive my deceased mother,” the actor fondly recalled. He candidly revealed he would do as many movies as he could if money were his first priority. Right now, he said, nothing else mattered the most to him than his father and loved ones.

There's really no better way to end the interview for a movie that speaks about family and loyalty in the first place than Wu Chun's last statement.

Text and Photos by Linus Tee 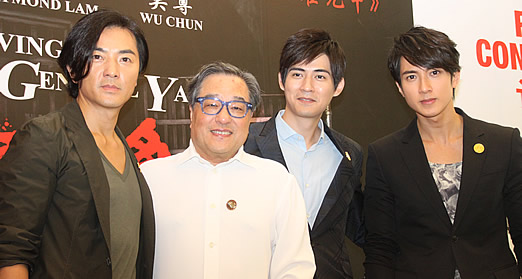