Synopsis: Based on the true story that will inspire the world, Warner Bros. Pictures’ King Richard follows the journey of Richard Williams, an undeterred father instrumental in raising two of the most extraordinarily gifted athletes of all time, who will end up changing the sport of tennis forever. Two-time Oscar nominee Will Smith (“Ali,” “The Pursuit of Happyness,” “Bad Boys for Life”) stars as Richard, under the direction of Reinaldo Marcus Green (“Monsters and Men”). Driven by a clear vision of their future and using unconventional methods, Richard has a plan that will take Venus and Serena Williams from the streets of Compton, California to the global stage as legendary icons. The profoundly moving film shows the power of family, perseverance and unwavering belief as a means to achieve the impossible and impact the world.

If you know the story of Richard Williams, this feel-good drama about how he had forged his daughters, Venus and Serena, into a pair of tennis superstars would probably not do. Though it does highlight some characteristics of Richard’s parenting, it is hardly the whole story about Richard, and does not even scratch the surface to portray his real-life complexities. Yet those who do not mind a less-than-complete portrait of the eponymous character will find that ‘King Richard’ is never less than engaging, and often even warm and appealing.

‘King Richard’ begins with Richard (Will Smith) accosting various tennis coaches at a country club to try to convince one of them to train his teenage daughters for free. Not surprisingly, he is met with rejection at almost every turn, all the more so because tennis was primarily a white man’s game. Only after deliberately wandering into the middle of a practice match between Pete Sampras and John McEnroe does Richard get the attention of Sampras’ legendary coach Paul Cohen (Tony Goldwyn), who offers to coach only one of them for free (note: Richard chooses the older Venus).

Besides how Paul comes to coach Venus, the first half hour also pays tribute to Richard’s doggedness as a father and mentor. Not only is he determined to keep his children off the streets, Richard takes it upon himself to train them, open doors for them, and even chart the future according to what he thinks is best for them. It is humbling seeing how willing he is to cajole, argue and refuse to take no for an answer, while at the same time enduring the taunts of those of his own race, be it the local thugs who scoff at him trying to teach his daughters on Compton’s cracked concrete tennis courts or his neighbour criticizing his rain-or-shine practices.

To director Reinaldo Marcus Green’s credit, he and writer Zach Baylin do eventually present a more balanced perspective of Richard’s parenting, by setting up a number of tense exchanges between Richard and his wife Oracene (Aunjanue Ellis). While she does not get as much time as Richard on screen, Oracene is in her own way a force to be reckoned with, a stoic, down-to-earth figure who is always ready to defend their children against Richard’s occasional excesses – one such occasion is when Richard thinks of leaving the girls at the neighbourhood store to walk the rest of the three miles home in order to teach them humility, before Oracene chastises him for risking their children’s lives.

Another such occasion leads to Richard deciding that Paul does not have their best interests at heart and engaging the services of Florida-based Rick Macci (Jon Bernthal) for Venus and Serena instead, a game-changing (pardon the pun) step that will see the family move from California to Florida. Though Rick will eventually lead Venus to take on the top tennis player in the world Arantxa Sanchez Vicario (Marcela Zacarias), Richard and Rick’s partnership isn’t completely smooth-sailing, not least because Richard refuses to let both his daughters compete in the juniors despite Rick’s repeated attempts at persuading him otherwise.

Because the outcome of the match is already known, the real excitement here is appreciating the journey that Venus and Serena underwent, and the indomitable role which their father Richard had played in it. As Venus and Serena respectively, Saniyya Sidney and Demi Singleton are magnificent in their roles, full of childlike wonder and joy yet ambitious, hardworking and driven by the mission their parents have established for them. Ellis too is just as superb, providing Oracene with measure and grace. Yet, each of these female performers are but supporting acts for Will Smith, who clearly hopes that his intentional underplaying of Richard will earn him at least another nomination come awards season.

Those familiar with Smith will know that the actor has been a fan of Richard since more than two decades ago, not only because of his admiration of Richard’s unshakeable belief in his children but also of his indignation at how the news media has vilified Richard over the years. Smith’s passion for the project as well as the character is evident, but beyond the obvious transformation with an exaggerated Louisiana drawl and hunched posture, the actor isn’t afraid to portray Richard as a stubborn, controlling and sometimes unfathomably tenacious person. Even as it does veer into hagiography, Smith plays it honest when he gets the chance to, and it is for the most part a winning performance that could very well win him the coveted Oscar prize.

It bears reminding though that ‘King Richard’ ultimately presents a filtered look at the controversial figure who had raised eyebrows and provoked endless consternation in the tennis world. Of course, without the astounding success of Venus and Serena, Richard Williams wouldn’t probably have a Hollywood biopic of his own; still, as varnished as it may be, this is still a warm, exuberant, old-fashioned drama that mixes race, class, sports and celebrity into an engrossing watch. It is also anchored by a regal Will Smith, who alone is worth the price of admission.

(Mixing race, class, sports and celebrity into an engrossing family drama, this portrait of Richard Williams boasts a regal leading performance by Will Smith) 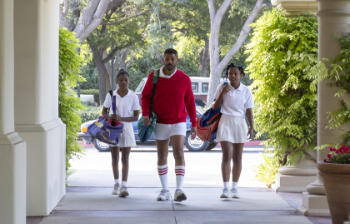