Synopsis: Following the excitement of first Bangkok and then New York, a big murder case takes place in Tokyo. Chinatown master detectives Tangren (Wang Baoqiang) and Qinfeng (Liu Haoren) are invited to take up the mystery. Adding to the excitement are the other detectives on the CRIMASTER international detective list as well as the current top rank, Q. Yet another hilarious battle of wits is set to take place...

As with many titles that occur around the lunar new year, Chinatown Detective 3 is a film that is just going for the entertainment jugular. There’s sprawling chase scenes, enough costume changes for a Victoria Secret show, and the involvement of extras the size of a small country.

Not that it’s all bad. This third chapter brings detectives Tang Ren (Wang Baoqiang) and Qin Feng (Liu Haoran), who’s his nephew but really the lead, to Tokyo. It seems the crime lord Noda Hiroshi (Satoshi Tsumabuki) has been falsely accused of murder, but it’s all the more dire because the victim is leader to a Thai triad group.

This lends itself to a script that milks the two cultures for what it’s worth. We get sumo wrestlers and cosplay parades weaved in with moments of Thai appearances, such as the Detective Jack Jaa (Tony Jaa). Some will find enough appropriation in there to start a protest - not to mention Tang Ren’s overt bumpkin accent as a Chinese mainlander - but the audience isn’t really here to be offended, and so it all slides.

Like an extended ad for Japan’s tourism board, Chinatown Detective 3 is rife with scenes and locations from the country. From festival chariots and Mario karts, to an onsen encounter with the yakuza, you’ll be forgiven for forgetting about the story.

Chen Sicheng attempts to string the action-mystery plot together, and to give him credit, the pace is relentless. But sometimes the non-stop visual effect wizardry and OTT acting from his characters is more distracting than what it’s worth. Tang Ren and Jack are almost never really funny, and their slapstick tropes really push beyond their expiry dates.

Luckily, the boyish Qin Feng and frilly local Japanese detective relief us from the antics, and the district police chief portrayed by veteran Tadanobu Asano, is a joy to watch. His simmering performance gives the counter-weight to all the shenanigans the group gets into.

Also enjoyable are some side characters, such as the henchmen of Hiroshi. In perhaps one of the better scenes in the morgue, a giant switcheroo results in a fantastic sequence, helped by the commitment of the goons.

Within this story are sequences that are all about the gimmick. The camera work here moves non-stop, swirling and swooping to give us the feeling of being on a 2-hour rollercoaster ride. CGI comes in spades, sometimes disregarding script logic to just bring in a fancy idea. Again, it is fun to watch, giving visual pleasure if nothing else, but perhaps Chen should have focused more on his decent cast members and given them a better chance to shine, without zooming in and out of their eyeballs.

In the midst, the plot thickens of course, to include twists and surprises. It gets a little too convoluted at times, but again, we are here really not to sit down to a suspenseful expert whodunnit, but a vehicle for a China-made production to go big in scale and laughs. It’s impressive for sure, but it sometimes feels like a pomeranian - all hair, little dog.

(If you’re looking for mindless entertainment with plenty of scenic Japan icons, this is it. There’s decent material there, underneath all the fluff, but it often doesn’t surface enough) 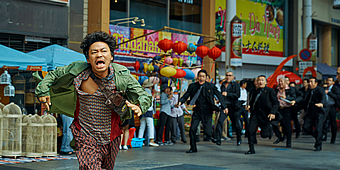