Synopsis:  Puppy Quill(nickname Little Q) is born with a birthmark in the house of Dr. Lo (Frankie Lam), it is being sent to the Chan’s family after two months. Mr. Chan (Roger Kwok Chun On), Mrs. Chan (Charlie Young) and their daughter Chi Kiu (Chu Tian Liu and Angela Yuen plays the childhood and teenage character of Chi Kiu respectively) take care of Little Q, they bond well with each other. As Little Q grows bigger, it is being trained by guide dog trainer Simon (Him Law) . Simon takes it to match with famous chef Lee Bo Ting (Simon Yam). He has become irritable and constantly losing his temper over his sister Bo Yi (Gigi Leung) who resigned her teaching job to help Bo Ting at his dessert house since he lost his eye sight. Bo Ting tries to drive Little Q away for several times, but as a well trained guide dog Little Q always stays by Bo Ting’s side and protects him under any circumstances. Eventually Little Q earns Bo Ting’s trust with its loyalty prompting him to take a new lease of life and quit blaming his blindness. He continues to delve into new dessert recipe and travels around with Little Q. However, as Little Q gets older and Bo Ting gets sick, the two of them has to face an unwilling separation......

Little Q is a HK/China production based on a Japanese novel that talks about the life of a guide dog. In fact, there’s a Japanese movie adaptation of it which was released back in 2004 (coincidentally the same year our humble site was setup) entitled Quill. Almost 15 years have passed and movies about canine remains faithfully, ever ready to tug at audiences’ heartstrings.

For dog or animal lovers who hasn’t missed any of the past Japanese dog titles and Hollywood’s more recent A Dog’s Purpose series, Little Q still manages to be somehow mushy, cuddly and heart-warming.

In this Chinese version, the story revolves around Bo Ting (Simon Yam), a celebrated pâtissier who has lost his eyesight and desire to live. At the recommendation of his friend, a guide dog by the name of Little Q is brought in to assist in his daily life liked helping to walk him to his restaurant for example. But first, Bo Ting must overcome his stubbornness and fiery temper to accept Little Q as his friend and guide.

Little Q on the whole is calculated to ensure that audiences shed a few tears as and when, sweat a little for the master and his furry servant and laugh at all the silliness generated. From this perspective, without a doubt you are going to enjoy this flick that is directed by Law Wing Cheong whose last movie was the Donnie Yen’s flop, Iceman 3D. Law who started as an assistant director and editor at Milkyway seems to be more at ease helming this emotional canine-human drama than an action fantasy flick. With his firm direction and handsome looking cinematography from Chan Chi-ying, Little Q is definitely pleasing in terms of visual.

For sure, the narrative can be a tad too simple for some. There are a few scenes that depicts how guide dogs actually carry their job and responsibilities with unseen loyalty and dignity. However, such scenes are few and far. Aside from those moments, Little Q is contended in delivering a man who was once so broken and depressed but found new meanings when Little Q came to his life.

Simon Yam who suffered a few cuts from an attack recently delivers one of his career-best performances as Bo Ting. Yam effortlessly capture the anguish and sentiment of his character and the chemistry with his canine actor is undeniably one of the strongest aspects of this movie. Despite having Gigi Leung playing his supportive sister, Him (sometimes credited as Bruce) Law as the coach from the Guide Dogs Association, Charlie Yeung, Frankie Lam and Roger Kwok in smaller roles, Little Q belongs entirely to Yam and Little Q (credited to Pudding in the credits).

Let’s face it. Many will call Little Q a small manipulative movie that is not worth your money or time. But for those who just wants a schmaltzy time (maybe an excuse to shed a few tears in the dark) with a four-legged pal (if you can’t afford one or not able to take care of one in real-life), then Little Q comes recommended.

(A gut-wrenching performance from Simon Yam and Little Q) 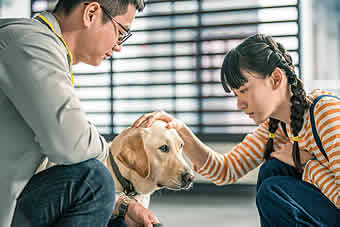