Synopsis: A teenage village girl SAI inherits the curse of the Krasue, forcing her to live as a bloodthirsty demon by night and as an ordinary human by day. The terrified villagers organise nightly Krasue hunts to protect their loved ones, not knowing that the demon is one of their own. Only Sai's childhood friend NOI who has fallen in love with her, knows the terrible secret. As he falls more deeply in love, Noi's selflessness may have consequences beyond his imagination.

You are not wrong if you thought this Thai movie is a romance flick. The poster, which shows a man kissing a floating head, does evoke a dreamy, passionate sense of affection. By the end of this 122 minute movie, the bittersweet conclusion may leave you teary eyed.

Based on a Southeast Asian folklore, the spirit in question here is a “krasue”, a female flesh-eating ghost. In the day, she lives like a human. When the moon comes up, her head comes off from her body and floats around looking for flesh and blood.

Kudos to director Sittisiri Mongkolsiri and writer Chookiat Sakveerakul for not turning this tale into an all out horror. Considering how the premise can become cheesy and laughable, this film takes on a different approach and explores the fable through a love triangle.

The female protagonist is a young nurse who lives in a village where the inhabitants are living in fear because the krasue has been devouring their livestock. She is friends with a young man who is hoping that they can become a couple. However, her heart is yearning for their childhood buddy, a smart teenager who is studying in Bangkok. When he returns with a group of krasue hunters, strange things begin occurring and a bloody battle between humans and monsters ensues.

Thai movies are known for featuring good looking people. Panthira Pipitthayakorn is the female lead, and her sweet look is perfect for the role. We love the scene when she first saw traces of blood on her bed. The slight smile on her face is a nice touch to the story. When it turns out that she may be the krasue that is wreaking havoc in the village, Pipitthayakorn grasps the emotions of fear and horror nicely.

The actress’s male co leads are expectedly handsome. Oabnithi Wiwattanawarang puts his boyish looks to good use as he expresses wide eyed wonder upon his return from Bangkok. The filmmakers make use of Sapol Assawamankong’s nice bod by having him go shirtless in several scenes. One of the most heartbreaking things about the story is seeing Assawamankong’s one sided love taking a tragic turn.

Unless many other horror flicks which moves at a frantic pace, this movie takes its time to flesh out the characters’ dynamics and motivation. The movie is also beautiful to look at. Watch out for the sequence where Pipitthayakorn and Wiwattanawarang enter what looks like an enchanted forest to look for antidotes to the monster curse. The art direction is brilliant: you see light draped over the grass patches and there is a sense of fascination. Of course, when this gets destroyed by the bad guys later in the story, the devastation can be felt.

The only jarring aspect of the movie takes place towards the end when the man versus monster battle takes place. While the computer effects are decently pulled off, the tone is drastically different. It offers the action, but the sequence still feels out of place.

Thankfully, the movie ends on a bittersweet and melancholic note. And you will be left thinking about whether monsters are indeed the scariest beings on earth.

(Packaged as a horror movie, this is essentially a bittersweet love story about a girl and her two childhood friends) 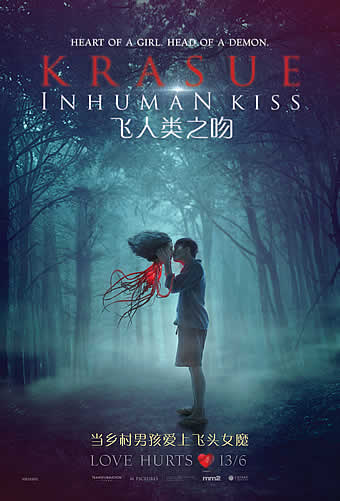