Synopsis: From Disney Live Action, director Jon Favreau's all-new The Lion King journeys to the African savanna where a future king is born. Simba idolizes his father, King Mufasa, and takes to heart his own royal destiny. But not everyone in the kingdom celebrates the new cubs arrival. Scar, Mufasas brother-and former heir to the throne-has plans of his own. The battle for Pride Rock is ravaged with betrayal, tragedy and drama, ultimately resulting in Simbas exile. With help from a curious pair of newfound friends, Simba will have to figure out how to grow up and take back what is rightfully his. The all-star cast includes Donald Glover as Simba, Beyoncé Knowles-Carter as Nala, Chiwetel Ejiofor as Scar, James Earl Jones as Mufasa, Billy Eichner as Timon and Seth Rogen as Pumbaa.

The year was 1994. This reviewer remembers faithfully visiting a certain fast food joint every week to collect the free toy from The Lion King that came with a kid’s meal. The toys were adorable, and definitely not a true reflection of how lions, meerkats, warthogs and hyenas look in real life.

Twenty-five years later, it is time for the grown-up in this writer realise how Disney’s animated classic would look like if it took place in real life. Bring on the tech wizards to create photorealistic animals with some movie magic.

Is there a need for Disney to adapt its classic animated films into live-action movies? While they may hold a special place in most of our hearts, these adaptations are perfect tools to introduce the Disney brand to a whole new generation. For older viewers, these imperfect products may never live up to the original, but they serve as a trip down memory lane.

You probably already know quite a bit about the Oscar-winning movie featuring Simba, a lion cub who runs away after Dad gets murdered by a villainous uncle. Eventually, the adult Simba returns home to claim his throne, taking his place in The Circle of Life.

How does Jon Favreau’s live-action version of the masterpiece compare with the original? There’s much to feast on visually, but there aren’t many surprises – simply because maybe there isn’t a need for die-hard fans. The producers probably didn’t see the need to reinvent the wheel since there are already hordes of fans.

From the opening scene where the animals of Pride Lands celebrate Simba’s birth, to the finale where he takes his rightful place before a grand coronation ceremony, there is much to marvel at throughout the movie’s 118-minute runtime. The is perfect (watch closely and you will notice the slightest twitch of any character’s ear), the movie’s production values are sky high (it feels like a high budget National Geographic documentary), and everything is gorgeous to look at.

What stands out from the crowd are the very funny Timon and Pumbaa. If you don’t already know, the comic duo of a meerkat and warthog will teach Simba how to live life without worries by singing “Hakuna Matata”. Voiced hilariously by Billy Eichner and Seth Rogen,, you can feel the spontaneity between the comedians. They are easily the best parts of an otherwise measured movie.

The star-studded voice cast also includes Danny Glover and Beyoncé Knowles-Carter as adult Simba and Nala (their rendition of “Can You Feel The Love Tonight” feels a little too modern), John Oliver as the bossy hornbill Zazu, Alfre Woodard as the motherly lioness Sarabi, and James Earl Jones (Star Wars fans will know him as the voice of Darth Vader) reprising the role of Mufasa.

Chiwetel Ejiofor takes on the almost impossible task of voicing the wicked Scar (Jeremy Irons did a wonderful job in the animated version), but the British actor managed to make the villainous character his own. His version of the bad guy anthem “Be Prepared” is to die for.

Composer Hans Zimmer returns to score the film, and the majestic orchestral music infuses familiar themes with new arrangements. Watch the movie in a cinema with an awesome sound system and you will be awed by how much the music carries the story. Disney wouldn’t miss the chance to bait the Oscar voters: Beyoncé and Elton John each contribute a new song to the soundtrack.

Should Disney continue churning out remakes of our childhood favourites? For fans who want to indulge in nostalgia, the answer is a definite yes.

MOWGLI: LEGEND OF THE JUNGLE (2018)
THE LION KING - ORIGINAL MOTION PICTURE SOUNDTRACK (2019)
Back 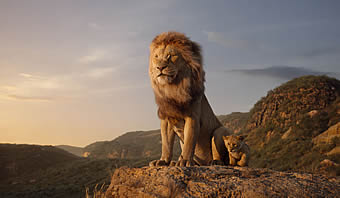