Synopsis: Bohemian Rhapsody is a foot-stomping celebration of Queen, their music and their extraordinary lead singer Freddie Mercury, who defied stereotypes and shattered convention to become one of the most beloved entertainers on the planet. The film traces the meteoric rise of the band through their iconic songs and revolutionary sound, their near-implosion as Mercury's lifestyle spirals out of control, and their triumphant reunion on the eve of Live Aid, where Mercury, facing a life-threatening illness, leads the band in one of the greatest performances in the history of rock music. In the process, cementing the legacy of a band that were always more like a family, and who continue to inspire outsiders, dreamers and music lovers to this day.

Imagine the amount of pressure placed upon you when you have to (or decide to) produce a film about a legendary band like Queen?

The expectations are definitely high, especially among die-hard Queen fans.  Truth be told, films like these can go both ways; either extremely magnificent or atrociously ghastly.

To be honest, I am not a Queen fan, although I do know some of their songs (of course).  But this film instantly converted me into a much bigger Queen fan.  And now I wished that I was born in such an era and be able to see Queen in their full wonderment.

The film starts off with Freddie Mercury preparing for Queen’s well-known performance at the Live Aid 1985 at London’s Wembley Stadium, followed by a quick transition to how Queen all began and then a chronological timeline of the lives of the band members of Queen (mainly Freddie Mercury), leading back up to Live Aid 1985.

The film did somewhat live up to the hype that it was given.  Flashy clothes, electrifying music, dramatic episodes; it definitely has what it takes to be a musical blockbuster with all its intensity overflowing throughout the film.

Rami Malek steals the show with his interpretation of the legend himself, Freddie Mercury.  With so much enthusiasm and eccentricity, it is no wonder that viewers might think that Freddie himself have had something to do with Rami’s acting! Every of his movement seem to be executed with so much passion and with ease and every line is filled with so much gusto.  The enthusiasm in his character portrayal will definitely grow on you.

Despite the spotlight being mostly on Rami, just enough attention was given to the rest of the characters (especially the band members) and character development was gradual and steady, beefing up the plot with dramatic fights, strong tensions and enduring moments.

Strangely, eccentric scenes that are not in sync, alongside varying colour resolutions and saturations, made transitions between scenes choppy.  Whether the intention was to portray Freddie’s eventful life through the scene transitions or to showcase Dexter Fletcher’s challenges, having to pick up the pieces upon Bryan’s sudden departure as the director of the film, the lack of coordination at certain points and the ‘uniqueness’ of certain scenes seem to derail the film and made it hard for one to watch it without feeling uneasy or unsettled.  The extra long Live Aid 1985 scene may either be a treat or a drag to some.

Rami’s singing voice is also questionable, as it is reportedly a mixture of Freddie and his voice to create a mixture that does not look too much like a lip-sync battle on Rami’s part.  While the lack of authenticity is discrediting, one has to admit that it would be a challenge for any individual to replicate or do justice to Freddie’s powerful vocals, so it might have been better to ‘play safe’.

Although this may or may not be the best interpretation of the Queen, one must admit that this film still entertains and delivers its core purpose of being true to their legacy and lives.  And like their hit song of the same title, “Bohemian Rhapsody” is a mixture of intensified emotions, diverse landscapes and subtle nuances that might be too much for some, but will definitely go down in history at the first biopic film of the legend.  And in years to come, a great piece of art to refer to.

One thing’s for sure: You *will * be entertained.

(Come and enjoy this fun interpretation of Queen and the lives of Freddie Mercury and the other band members. There will be no regrets and you got to watch it to believe the magic) 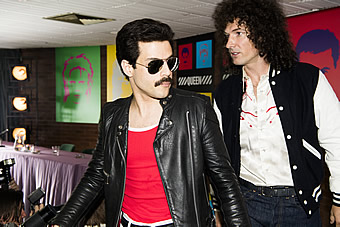