Synopsis: The movie centres around a parking attendant named Fei Fei who always dreams about becoming a singer like her famous idol and namesake - the legendary Taiwanese singer Fong Fei Fei.

Coming off the high of the successful film anthology 7 Letters, where director Royston Tan was the lead filmmaker, is Tan’s 3688 (想入飞飞). The film is Tan’s fifth feature film following a seven-year hiatus after 12 Lotus, and there are expectations for the film to replicate the success of 881.

The film can be clearly split into two parts – Fei Fei the parking attendant and Fei Fei the singing competition contestant. The extensive first half served primarily to construct Fei Fei’s home and workplace, and did not contribute much to the actual storyline. This might be partly due to the unnecessary sequences, and introduction of characters that did not serve much purpose, packing the half with too many, too short scenes. The short scenes also made the half feel choppy and disjointed, not giving the audience enough time to appreciate the relationships between characters, as everything was pretty much touch and go.

Thankfully, the second part was much better, dedicating more time to delve deeper into Uncle Radio’s state of mind, as well as Fei Fei’s struggles when dealing with her father’s illness, her lack of confidence, and her surroundings. Given that Fei Fei was participating in a singing competition, it also provided the opportunity for Chua and Tan Bee Keow, who plays the stereotypical diva contestant, Anita, to show off their singing skills, which were, to be honest, much more enjoyable than their acting.

The straightforward storyline and simple setting meant that first-time actress Joi Chua would have plenty of chances to shine. However, the acting was lackluster and stilted, as Chua drifted around carparks and just looked lost for most part. Chua’s best acting occurred in the scenes with theatre actor Michael Tan, whose performance as Uncle Radio was easily the most memorable. The father-daughter scenes, especially after Uncle Radio was diagnosed with dementia, were also the most poignant. Perhaps it was the lack of dialogue, or perhaps it was the Xia family’s HDB apartment, but those scenes were the highlight of the film, and will probably cause many wet eyes in the theatre.

Also new to acting was local rapper and YouTube personality Shigga Shay, who plays Yoyo, Ah Luan’s son. It might be the smaller role compared to Chua’s, as well as his rapping throughout the film (seriously, that rap on Fong Fei-Fei was wow), but it felt that his performance was not as cringe-worthy. On the other hand, providing the much-needed comic relief amidst the too-real world problems was Liu Ling Ling, with her loud costumes and voice, and to a lesser extent, Rahimah Rahim as Jenny, Fei Fei’s nemesis at work.

Personally, I liked that the ending of the film, which did not tie up all the ends too neatly, adding to the realism of the film. That said, the unimportant, frayed strings dangling were the most irritating – the sub-plots which do not add to the storyline, but seemed to be introduced to the film just because. Case in point: why did Fei Xiang (Jerry Huang) come back to New York, make coffee, then lie on a bed for the rest of the time? Would the film be as complete without the introduction of his role? Yes, probably.

As a whole, the film does seem more like an ode to the disappearing icons of Singapore than anything else, such as the white uniformed, hat-wearing carpark attendants, the subscription cable radio service Rediffusion, kopitiams and the soon-to-be-redeveloped Dakota Crescent. This was done at the expense of the storyline but to be honest, I did not mind it at all.

(With a healthy dose of nostalgia befitting the SG50 festivities, and the father-daughter relationship portrayed by Joi Chua and Michael Tan, 3688 is likely to be a crowd-pleaser, which will tug at the audience’s heartstrings) 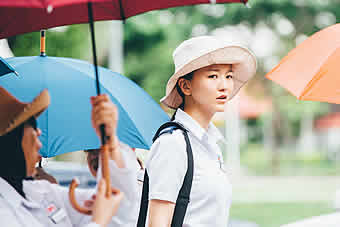