Five years and more than a few false starts later, Donnie Yen reprises his iconic role as the revered Wing Chun grandmaster Ip Man, capping a trilogy that saw Ip Man rise to distinction in 1930s Foshan, survive the Japanese invasion in the late 1930s and early 1940s, move to Hong Kong in the early 1950s and finally start up his own martial arts school in the British territory during the same time. Despite an epilogue in ‘Ip Man 2’ teasing the appearance of Bruce Lee in this immediate sequel, those expecting the legendary movie star to make more than a glorified cameo will undoubtedly be disappointed; whether because of copyright reasons or otherwise, Danny Chan (who first made good of his physical resemblance to the late Lee in the TV series ‘The Legend of Bruce Lee’) only appears twice in the whole film – once, at the start to ask Ip Man to be his master and twice, in the middle to teach Ip Man to dance cha-cha in exchange for some kung fu training.

Instead, ‘Ip Man 3’ finds the titular Master Ip rise up to protect the principal, staff and children (including his own younger son Ip Chun) of an elementary school from a ruthless property developer Frank (Mike Tyson), while preserving his own reputation under challenge from an aggressive fellow practitioner Cheung Tin Chi (Max Zhang). Besides the much touted mano-a-mano fight with Tyson, the former sees Master Ip cross paths with the cocky gangster Ma King Sang (Patrick Tam), an ex-disciple of Master Tin (veteran martial arts actor Bryan Leung Ka-yan) who has no qualms kidnapping children in order to force the principal’s hand. The latter however is more Master Ip’s antagonist by circumstance than by choice; in order to prove his name in an already crowded field of martial arts masters tacitly competing against each other for name, fame and disciples, Tin Chi touts his technique as the authentic Wing Chun and openly challenges Master Ip to a competition in order to emerge from the latter’s long illustrious shadow.

There are at least four good to great fights here – the first at the Western Union shipyard where King Sang and his gang hang out, the second between Master Ip and a Muay Thai kickboxer (played by Simon Kuke of Tony Jaa’s stunt team) sent by Frankie to ambush the former, the third between Master Ip and Tyson’s Frankie himself, and the last but not least between Master Ip and Tin Chi at the latter’s school. Like its predecessors, the best fights here are essentially two-handers between Donnie Yen and a worthy martial arts actor, so it isn’t surprising that out of the aforementioned four, it is the latter three that stand out. Of particular note, Yen’s duel with Kuke has an added thrill of taking place within the very confined quarters of a lift before moving on to a narrow stairwell; while Yen and Tyson’s one-on-one have the added urgency of time (i.e. within three minutes) and Yen’s finale with Zhang the added novelty of poles and knives in addition to pure fists.

In Sammo Hung’s place, it is the hugely respected Yuen Wo-ping who is taking over as action director here, and the latter opts for less showy set-pieces that lack the sheer adrenaline rush of those in the first two movies but nonetheless are note-worthy for being grounded in realism. Yes, there is no equivalent of the tabletop fight between Yen and Hung in ‘Ip Man 2’, which though thrilling to watch was also criticised for being too heavily reliant on wirework and a suspension of disbelief; rather, Yuen assembles a supporting cast with actual kung fu abilities and talent – if not brute force (we’re talking about you, Tyson) – to spar with Yen and leaves the rest up to the performers’ speed, agility, strength and skill. If there was the ambition of topping the earlier films, there is no hint of that here, and we suspect those who are just here for the action will probably come off a tad disappointed that there is no one standout moment of utter exhilaration that defines the entire movie.

Yet ‘Ip Man 3’ is all the better for not trying to better its own predecessors; instead, it finds its own rhythm by being a touching portrayal of marital love and devotion between Master Ip and his wife Cheung Wing Sing (Lynn Xiong). More than the earlier films, Wing Sing’s supporting role is especially poignant here, as her character discovers from a persistent pain in her abdomen that she is in the late stages of cancer. A good part of the middle act of ‘Ip Man 3’ is composed of intimate scenes between Master Ip and Wing Sing as they struggle to come to terms with the latter’s frailty and impending fate, and what emerges in these quieter moments is a touching portrait of Ip Man’s profound love for his wife above all else, retreating into seclusion from the wider martial arts fraternity even as his reputation is on the line so as to be by her bedside day after day.

As always, it is Yen who anchors the film from start to finish with his nuanced portrayal of Master Ip. A passionate speech he makes to Kent Cheng’s Sergeant ‘Fatty’ Po about not bowing to his corrupt Western superior would have sounded sanctimonious if not for Yen’s expert under-playing; but more than his character’s dignity or honour this time round, Yen depiction of Master Ip’s equanimity amidst his grief at his wife’s debilitating state is especially moving. The emphasis on their husband-and-wife relationship also gives Xiong her most substantial take on her character yet, and her scenes with Yen are also the most textured among the three films yet, brimming with warmth and affection. None of the other supporting characters are anywhere as compelling, but between Tam’s hyperbolic over-acting and Yen’s subtle understatement, it is fortunate that Tyson’s bit of stunt casting comes off less caricatured than one would have feared.

That is no small measure credit to its director Wilson Yip as well as its trio of writers (namely, producer Raymond Wong’s son Edmond Wong, Chan Tai-li and Leung Lai-yin), who nicely balance the action-oriented setpieces with a solid and grounded character study built upon the personal real-life struggles of their titular character. While that in ‘Ip Man’ was a combination of two halves from pre-war and wartime Foshan and that of ‘Ip Man 2’ felt like no more than narrative glue to hold the ostentatious action sequences together, the storytelling here is much more cohesive, organic and purposeful on its own. These are small but no less significant achievements for ‘Ip Man 3’, which eschews an ultimately self-defeating quest to top its ownself in favour of a poignant finish that underscores the Man’s principles, philosophy and passion. Oh yes, it may not boast the most incredible fight scenes of the trilogy, but in spirit and in tone, it is a beautiful and fitting conclusion to quite possibly the most outstanding martial arts series of recent time. 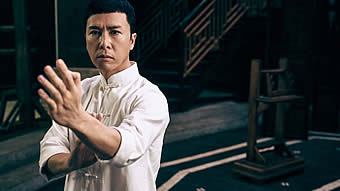 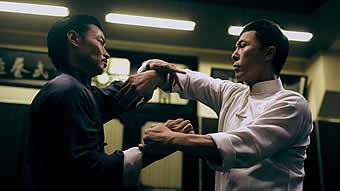 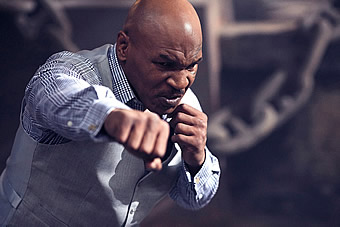 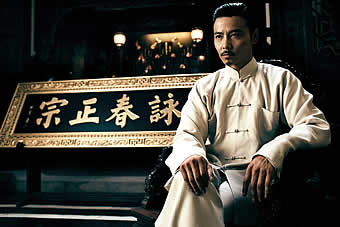