Synopsis: Huo An, the Commander of the Protectorate of the Western Regions, protects China’s border, securing peace among the warring tribes on the Silk Road. He often has to enter fights to settle disputes, slowly earning respect from all the tribes. When a convoy of gold bearing a foreign insignia is discovered inside China, he is accused of treason and sent to the border as a slave laborer. With only a small group of his most loyal soldiers, he must fight to survive in the prison camp. General Lucius leads a small army of Roman soldiers to the border gate and outmatch the Chinese border guards. But when Huo An enters the battle, he single-handedly turns it around and earns the respect of Lucius. Among the Romans is a blind boy called Publius, the youngest son of Rome’s Consul Crassus. Crassus was assassinated by his ambitious eldest son, Tiberius, who is leading 100,000 soldiers towards the border gate, employing subterfuge to kidnap Lucius. With the help of the neighboring tribes, Huo An builds an army that can fight the Roman war machine. In the midst of battle, Huo An locates Lucius who has been tortured, but it is too late to save him. He avenges the death of the Roman general, killing Tiberius in single combat. Despite the great loss of life, Huo An has restored the honor of Lucius and secured the borders of China from ruthless invaders.

So desperately does writer-director Daniel Lee’s historical epic strain for authenticity that it opens with a prologue set in the present day, when two archaeologists (Vanness Wu and Karena Lam) set out to find an ancient city known as Regum hidden high above the mountains in the Silk Road region. As the opening title is presented, we are taken back to 480 BC, when peace was as precious a commodity as gold in the restive region, which saw a total of 36 nations fighting to claim their rights over the land. On the brink of a war between two of them – the Huns and the White Indians – Jackie Chan’s General Huo An is introduced as the Commander of the Silk Road Protection Squad, a small but fiercely loyal band of men given the seemingly impossible task of keeping the peace.

Lee might as well have named him Saint Huo An, because really that’s what he’s been made out to be. Even at the risk of danger to his life, Huo An resolutely refuses to pull a weapon against the Huns’ icy warrior Cold Moon (Lin Peng) – and in the process taught us how to get a Hun bride, i.e. inadvertently grab the lady’s boobs in the midst of fighting (that’s classic Jackie Chan for you, we say) and then inadvertently taking off her mask. Framed for treason, Huo An turns the other cheek and readily accepts his and his men’s punishment to be sent away to a ravaged city known as Wild Geese Gate. And when conflict breaks out amongst the various factions of inmates within the city, Huo An steps in to urge peace, even though everyone else seems to be itching to get at the other’s throats.

Frankly, we still might have given Lee’s ‘Dragon Blade’ the benefit of the doubt about the noble General Huo An – that is, until John Cusack’s General Lucius rode into the picture with his cavalry and our dear Chinese general opened his mouth to converse in English. Even if we could accept that Huo An is a man of different tongues, Chan’s deliberate attempt to portray his character’s strength – or to be more precise, lack thereof – in the English language is utterly cringe-worthy. It is so appalling that it is truly embarrassing, and what’s worse, the humour is unintentional. One line we simply cannot get out of our heads is that which Chan asks Cusack “Why you want to ‘bao chou’” in exactly those words, after teaching the latter how to say ‘revenge’ in Chinese. F**king awful, in our opinion.

Anyhow, the Roman part of the story is completely fabricated for this movie, so we might as well fill you in quickly. As the story goes, Lucius was fleeing the eldest son of one of the two serving Consuls, who had murdered his father and intends to murder his younger brother Publius (Jozef Waite) to claim the throne. Needless to say, Lucius’ alliance with Huo An brings the Roman conflict to their doorstep, culminating in a mano-a-mano of Huo An against the villainous Tiberius (Adrien Brody). Oh, along the way, Huo An gets betrayed by his deputy Yin Po (K-pop star Choi Si-Won), who meets an ignominious death at Tiberius’ blade too early and too quickly in the movie to ever appease his fans whom his casting obviously courts.

There is no other way to say this – ‘Dragon Blade’ is simply terrible. Huo An is honourable to a fault – and boring no matter how many times Chan tries (unintentionally) to goof him up. Lucius hardly looks like a Roman general, and that’s not just because Cusack looks perpetually tired in the role. Brody poses a lot for his slo-mo shots, but it is a performance so full of cheese you’d think his trophy for ‘The Pianist’ was made of it. The friendship between Chan’s Huo An and Cusack’s Lucius is unconvincing, and so too the message of peace, not war, that Lee drums in at every single opportune or inopportune moment. There are also inexplicable moments of gratuitousness, such as when Huo An rushes to save Lucius only to find that his eyes have been gouged out.

Though he has made several period epics of varying quality (his last, ‘White Vengeance’, was his best), Lee is completely lost here. Veering from self-seriousness to campiness to utter ludicrousness, Lee seems tone-deaf to the way his movie looks and sounds, which keeps hitting all the wrong and false notes. Anyone hoping for this to be a return to Chan’s CNY blockbusters of the 90s will be sorely disappointed – besides some close-combat sequences which largely sees Chan do his signature dodging more than anything else, this is no ‘CZ12’ or for that matter the Jackie we grew up loving. We might also warn Choi Si-Won fans as well – we’re not quite sure how much filming he did, but he appears in a total of two scenes here for no longer than ten minutes in a two-hour plus movie.

Not even Chan as action director manages to redeem this fiasco. The battle scenes employ a lot of extras and enough widescreen lensing to awe, but the staging itself is pretty dull and uninvolving. The climax is a utter rip-off of ‘The Hobbit’, from the moment several different legions unite against the common Roman enemy to the very use of eagles by the Huns to create a strategic turning point in the battle. There is even a ‘WTF’ moment when Chan is first crowned First Centurion of the Roman Legion to take over Lucius’ troops and loses half his men to his enemy’s arrows and spears before realising with a shout of ‘stones!’ that they could use the boulders behind them to throw at their enemies. By the time he gets to go one-on-one with Brody to prove a point more than anything else, Chan seems completely spent and it is as disappointing a fight scene as the worst we have seen from him.

Perhaps to emphasise just how absurd the entire enterprise is, Lee circles back to Vanness and Karena in present day to decide that they want the city to stay hidden, to claim it as their own, and therefore not to tell the rest of the team. It is a moment that, while incomprehensible in itself, makes perfect sense in the context of the whole movie. Indeed, ‘Dragon Blade’ is a hot mess and a spectacular misfire, not just by its star but also by its director, and if anything, further confirms that the once-promising careers of Hollywood stars John Cusack and Adrien Brody are going the way of Nicholas Cage..

(Utterly awful in every respect, this spectacular misfire from Jackie Chan and writer-director Daniel Lee is a complete mess from tone to character to action) 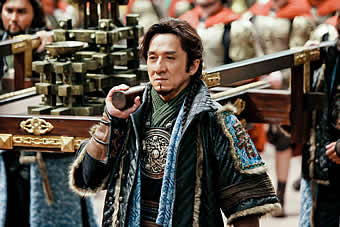