Synopsis:  In commemoration of Singapore’s 45th year of National Service, renowned homegrown director Jack Neo returns with a S$3million production – Ah Boys To Men. The movie stars local veteran actor Richard Low, well-known actress/comedienne Irene Ang, celebrated musician Roy Li and actors Wang Lei and Jacky. On top of these familiar faces, Jack Neo also introduces fresh faces to the cast lineup, including famous bloggers Mr Brown, Qiu QIu and Tosh. In conjunction with the NS45 campaign “From Fathers To Sons”, the movie shares how youngsters now step out of their comfort zone and learn the importance of protecting their country. Ah Boys To Men is sure to bring back memories for Singaporean men who have previously served National Service and at the same time, interest young boys who have yet to join the army.

Love it or hate it – National Service (NS) is an indelible part of the Singapore identity, and what better way on this forty-fifth anniversary of NS to celebrate the special place that it has in every Singaporean than to make a movie about it. So Jack Neo has done just that, embarking on his most ambitious (and certainly his most expensive) film ever that attempts to tell an NS story able to resonate with both the younger and the older generation who have been through that life-changing experience.

‘Ah Boys to Men’ is the name of Neo’s film, split into two parts after the filmmaker realised that he just had too much material to fit into one single movie. In this first-parter, Neo largely focuses on overcoming the psychological barrier that accompanies every new recruit’s entry into Basic Military Training (BMT), the barrier of fear, trepidation, reluctance and just general resistance to the sacrifice of freedom and two years of one’s prime teenage years.

The protagonist here is Ken Chow (Joshua Tan), a headstrong and impulsive rich kid who is forced to put his plans to study abroad on hold due to NS commitments. As such, he starts off hating even the thought of NS, and while his father (Liu Qianyi) tries to convince him to think positively about it, his mother (Irene Ang) busies herself trying to find ways for her son to skip NS – even going to the extent of approaching their Member of Parliament (MP).

To complicate matters further, his plans to go overseas included his girlfriend, who would also be heading overseas for academic reasons. Yet as the Government would have it, his application for deferment is denied, leaving him Tekong-bound in body but certainly not in spirit. Ditto for his fellow enlistees ‘Lobang’ (Wang Weiliang) and  ‘I P Man’ (Noah Yap), the former a particularly resourceful and enterprising buddy who sells charged spare handphone batteries to his section mates.

With generous support from Mindef, Neo accurately chronicles the baptism of fire of a BMT recruit in Pulau Tekong, especially in acclimatising to regimen and authority. Besides the morning revelry and the stand-by beds, there’s also the physical training in terms of IPPT, Standard Obstacle Course (SOC) and route marches. Rather than build too much plot into these scenes, Neo wisely keeps them simple by allowing his audience to project themselves into the various onscreen characters and relive their own BMT experiences.

Not only that, Neo also allows his audience to identify the various archetypes in NS – the ‘chao keng’ kings (i.e. Ken and Lobang), the over-achiever/ bootlicker (represented here by a certain bespectacled Aloysius Jin played by Maxi Lim) and the stern platoon sergeant (in the form of Second Sergeant Ong played by Tosh Zhang) – as well as the unique NS trademarks of singing, marching and water-parading. Part of the reason why the movie proves surprising entertaining is of course how easily anyone who has been through NS will be able to find something familiar and therefore nostalgic.

As one who has gone through a different generation of NS, Neo also observes with a keen eye the differences between NS in the past and the NS of today. The oft-heard line from those who did their NS in the 1970s is how easy recruits have it nowadays, and to illustrate this point, Neo takes the opportunity at certain points in the movie to flash back to how it would have been in the past – and that shrewd calculation easily ensures that his movie speaks also to the generation of males who have served NS in its early days.

For a good part of the movie, plot essentially takes a backseat while Neo dramatizes BMT then and now, but he gets back to it with a melodramatic twist in the last half hour. Thankfully, it is handled with more deftness than you would expect from a Jack Neo treatment (think ‘Money No Enough 2’), and while teetering on the brink of histrionics, it at least achieves its aim of getting its audience to think about the consequences of taking ‘chao keng’ to dangerous heights.

That’s of course a message that Mindef would gladly endorse, and let us warn you beforehand that there will be propagandistic talk glorifying the importance and significance of NS. Kudos to Neo however for ensuring that this movie doesn’t end up as no more than a Mindef mouthpiece, and for the audacity to include some common tongue-in-cheek jokes about the Service – these are particularly funny in Hokkien, and especially so when delivered by native dialect speakers like Wang Lei.

Lei also appears in the movie as Ken’s uncle, but like the other veteran actors, his role is no more than a supporting one. Instead, attention is placed square and centre on the newbies, whom Neo manages to elicit surprisingly convincing performances. The casting is spot on, with the actors easily inhabiting their roles – and most entertaining is Wang Lei’s getai protégé Wang Weiliang, who plays the loutish Lobang with panache. Importantly, the camaraderie amongst the actors is keenly felt, making it easier to buy into their team spirit in the movie.

You’ve probably noticed at this point that we’ve avoided mention of what was the selling point of this movie – the depiction of our island city at war, with iconic destinations such as the Central Business District (CBD) and Marina Bay hit and our HDB heartlands overrun by terrorists. Certainly, those were the money shots, but the ironic thing is how awkwardly they fit into the rest of the movie – no matter Neo’s purpose of trying to educate his audience of the significance of NS.

Those guessing that the sequences are no more than hypothetical scenarios at this point in time are however correct – and while it isn’t a dream like the much-ballyhooed ‘The Best Bet’, the rationale here for their inclusion isn’t any better. Yet ‘Ah Boys to Men’ doesn’t need Hollywood theatrics to stand out as a funny and entertaining ode to NS; on the contrary, all it needs – and what Neo has managed to do – is to tap into its audience’s own NS experiences and to portray them as accurately as possible. You’d laugh, you’d reminisce and you’d leave with a smile on your face knowing that you have been part of a Uniquely Singapore experience – on that account alone, this is a must-see for anyone who’s given up two years or more of their lives to the defense of this country.

(Tapping into his audience’s own NS experiences, Jack Neo’s latest is a funny, entertaining and ultimately nostalgic trip back to Tekong) 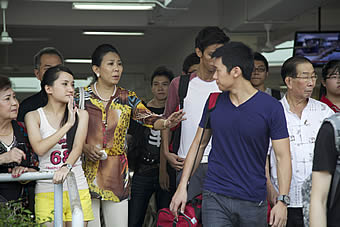 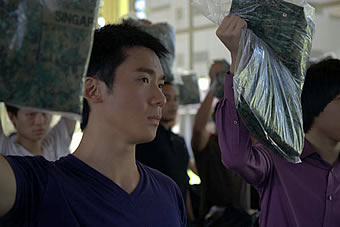