Synopsis: In Asia's safest city, the police have long been untouchable. Approaching midnight in Hong Kong, police headquarters receives an anonymous call: a fully-loaded police van carrying the forces, most advance equipment and five highly trained officers has disappeared off the grid. The hijackers possess direct knowledge of police procedures. They're already steps ahead. The police must meet a list of demands to ensure the hostage's release, including the delivery of a large ransom. Any delay will cost lives.

An explosion in the heart of Hong Kong city and the mystery disappearance of an EU van with five armed policemen onboard kick start a series of events that not only threaten the innocent citizens of Hong Kong but also the cohesion of the police force.

Heavenly King Aaron Kwok plays Lau, the Deputy Commissioner of administrative services of the HK police force while Tony Leung Ka Fai plays Lee, the Deputy Commissioner of operations. With the Commissioner (Michael Wong) away on a conference in Copenhagen, Lee assumed the position of officer-in-charge and authorized an immediate rescue operation (codenamed Cold War) of the kidnapped officers. However, Lau has doubts over Lee’s authority and a fight over the commanding position ensues. With the clock ticking including the safety of Lee’s son, Joe (Taiwanese idol Eddie Peng) being one of the kidnapped police officers, operation Cold War is still a go despite the differences.

Co-helmed by first time directors Sunny Luk (who serves as one of the writers and second assistant director on movies such as “Full Alert” and “On the Edge”) and art director Longman Leung, “Cold War” is an intense crime thriller that collectively packed a lot of stuff into a compact 100 odd minutes. Taking into account the countless familiar faces that the duo has assembled, this factor probably already worth the admission ticket alone. The summary above only accounts for the first half of the movie, yes you heard that right. You got an electrifying scene between Lau and Lee’s character. Two Heavenly Kings, one by the name of Andy sharing a scene together after their last collaboration in “Lee Rock II” almost two decades ago and a nail-biting scene involving Lau bringing a whole bag of cash to meet the kidnappers and ends with a gunfight on a busy road.

Another gentle reminder, all these happened in the first half of “Cold War” and we have yet reached the end.

Luk and Leung take a fresh spin on the usual crime genre and gave it a new life during the process thus instead of a straight out actioner liked Benny Chan’s “EU Strike Force”, we have a layered cop drama in the league of “Infernal Affairs”. The story is also the duo’s love song to their beloved homeland, a country that is run on a respected common law jurisdiction and enjoyed freedom of speech and accountability which is a stark contrast to the People’s Republic of China. The two filmmakers refuse to rest on their laurels that they have to introduce a young ICAC rookie, Cheung (Aarif Rahman from “Bruce Lee, My Brother”) in the next half of the movie to investigate Lau’s alleged involvement in the missing ransom which in turn question the existence of a mole in the force. This is not to say the scripting of “Cold War” is perfect. In fact, in an enthusiastic move to generate more twists and turns, a couple of missteps including too many false endings and a CG filled finale actually hamper the overall enjoyment a little.

After being lambasted for his cheesy acting in “Murderer” and “City Under Siege”, Kwok equipped with a salt-and-pepper hairstyle is surprisingly believable as the calm, confident Lau while the award-winning Leung shines in a role that screams for more. The other supporting cast includes Gordon Lam Ka Tong playing a role that he can virtually portrays in his sleep and action choreographer Chin Ka Lok doubling as Lau’s subordinate, the ever pretty Charlie Young pops in as Head of Public Relations with Andy Lau in an extended cameo as the Secretary of Security. I can’t say much for Eddie Peng but this young man unquestionably is a shining star to watch out for.

Even without the financial involvement of Mainland investors, “Cold War” is an impressive feat for the two relatively new filmmakers. The lush production values and picturesque aerial shots are examples of that. Although it doesn’t feature wall-to-wall action (think “The Viral Factor”), “Cold War” is a recommended title proving the crime genre which the HK movie industry is famous for is still very much alive. 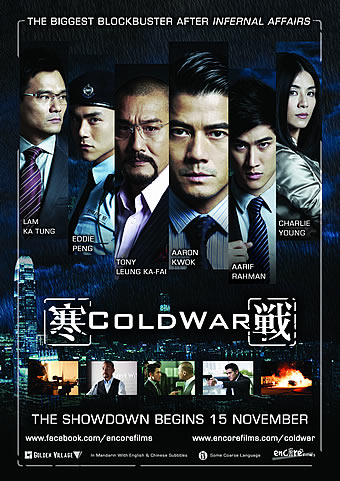 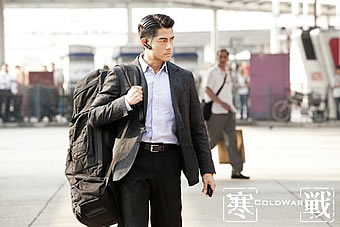 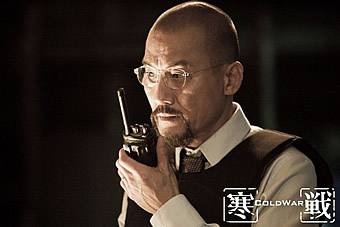 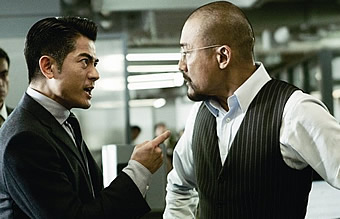 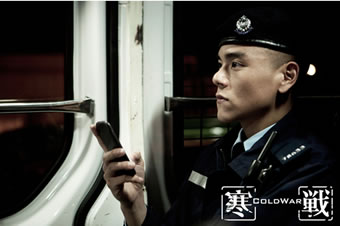 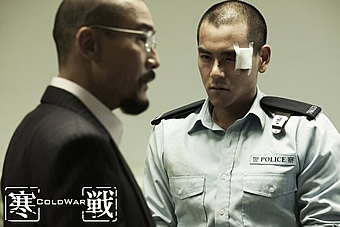 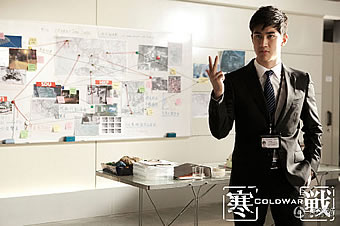