Synopsis:  Set on an island off the coast of New England in the summer of 1965, MOONRISE KINGDOM tells the story of two twelve-year-olds who fall in love, make a secret pact, and run away together into the wilderness. As various authorities try to hunt them down, a violent storm is brewing off-shore -- and the peaceful island community is turned upside down in more ways than anyone can handle. Bruce Willis plays the local sheriff. Edward Norton is a Khaki Scout troop leader. Bill Murray and Frances McDormand portray the young girl's parents. The cast also includes Tilda Swinton, Jason Schwartzman, and Jared Gilman and Kara Hayward as the boy and girl.

The opening film at this year's Cannes Film Festival, Wes Anderson's Moonrise Kingdom is exactly what you'd expect from a Wes Anderson film, and his latest is pretty much more accessible, playing on the usual quirks in a now familiar technical presentation that defines the auteur's unique filmmaking style. It's charming and entertaining, yet wistfully reminiscent of times when we were younger with little cares about the adult world,

As with most, if not all of Wes Anderson's films, it comes with an impressive cast list of the best that Hollywood has to offer. Central to the story are newcomers Jared Gilman and Kara Hayward, who play Sam and Suzy respectively, two kids who fall in love, and made a pact to run away from their New England town together. He brings just about everything required for a rugged survival, being the boy scout that he is and truly and proudly living up to the Scout's motto of being prepared, while she packs along an attitude that complements Sam's demeanour. Their disappearance sparks a massive search party mobilized to track them down, and that's when things start to get interesting with the many appearances of familiar faces.

Such as Bill Murray. He doesn't star in many films these days, but is in just about every Wes Andersen movie out there, sharing an affinity for the stories told by the director, perhaps liking his vision in how they get told. He stars as Walt Bishop, a lawyer and Suzy's dad, who goes ballistic with her disappearance. Playing his wife Laura is Frances McDormand, a lawyer too who shares secret romantic rendezvous with Bruce Willis' Captain Sharp, in what would probably be his most unglamorous cop role to date. Then there's Tilda Swinton personifying Social Services, adamant in getting Sam into an institution for the trouble he had caused, and Edward Norton starring as Scout Master Ward, under whose watch did Sam find opportunity to go missing. And rounding up the cast are Jason Schwartzman and Harvey Keitel in support roles. Whew! Talk about an ensemble!

Roman Coppola and Wes Anderson's wickedly whimsical tale packs numerous sub plots to pepper this film beyond a story of idyllic first love set against an impending storm, both literal and figuratively, with each major character shouldering their back stories that just didn't have the time to be explored a lot further, but provided with enough suggestions for one's mind to work them in imaginary detail. The central piece of the film would be Moonrise Kingdom itself, a small little paradise of a beach head that the kids established for their own little world, and the happenings that will likely become anecdotes when they grow older, from fish hook earrings to a romance that begins to get a little bit frisky.

Expect the usual Wes Anderson technical merits as well, and his trademarks all marking their stamp in the movie, from the pastel like colours, to the facial close ups, to its cinematography having that very linear feel, akin to reading a story book especially when the camera pans and tracks in vector, singular direction. Then there's almost always time for slow motion, and the absurd to happen that contributes to its comedic quality, no matter how serious the scene.

But what truly stood out, are the true gems Wes Anderson had discovered here in the child actors Kara Hayward and Jared Gilman, who hold their own against their veteran counterparts who happen to also be Anderson's film regulars, fitting in immediately like hand in glove. They vividly brought their respective characters to life and are refreshing in every way, with Gilman's fresh faced, eager beaver to please character set against the more brooding Hayward's, and the impressive skills of scouting and survival that Gilman's Sam brings to the table, against the more personal, and may I say selfish, nature of Hayward's Suzy.

The entire film can just center around them, and make everything else seem like unnecessary fat, but when put together under Anderson's unique vision, the movie transforms into a wonderful work of film art that will leave a smile. 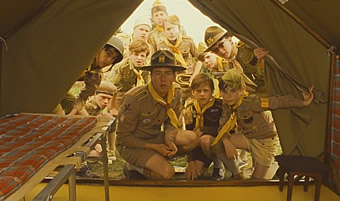 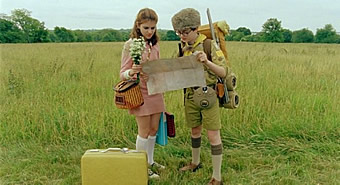 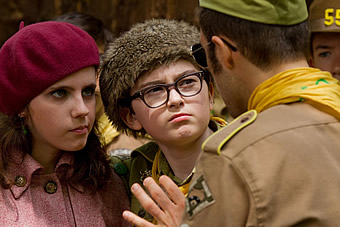 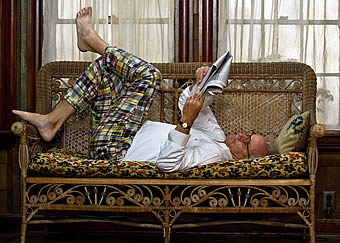 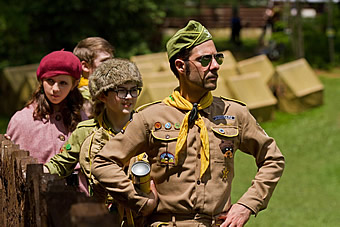 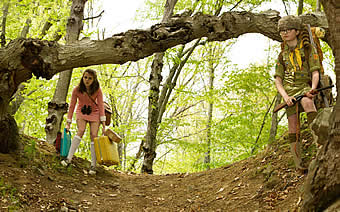