Synopsis: U.S. Marine Sergeant Logan Thibault (Efron) returns from his third tour of duty in Iraq, with the one thing he credits with keeping him alive - a photograph he found of a woman he doesn't even know. Learning her name is Beth (Schilling) and where she lives, he shows up at her door, and ends up taking a job at her family-run local kennel. Despite her initial mistrust and the complications in her life, a romance develops between them, giving Logan hope that Beth could be much more than his good luck charm.

I can presume that producer Denise Di Novi must be quite the Nicholas Sparks fan, having produced all of the author's works for the big screen from The Notebook to this latest film with Zac Efron headlining the cast. In some fashion, Sparks fans and romantic die hards will know exactly what to expect from the story, and to be honest it can be quite formulaic as far as romantic films go with the rules of engagement followed down to a pat, however films like these can either move you to wonder why some great romances don't happen to you in real life, or roll your eyes at some of the contrived moments.

Dear John had the lovebirds having to take a break no thanks to a call up for a tour of duty in the Middle East, and The Lucky One takes the cue from that theatre of war, where soldier Logan (Efron) finds himself being smiled at by Lady Luck multiple times in surviving many close shaves. He credits this to the photograph he randomly picked up from some rubble which had a beautiful blonde and an inscription at the back which reads “Keep Safe”, and makes a vow to track her down if he makes it out alive at the end and returns home. Which he does, and with some internet sleuthing and some good ol' legwork, finds this girl Beth (Taylor Schilling), a divorcee living with her mum and working in an animal shelter, and eventually finds herself becoming an employee, falling in love with her in the process.

Now you have to suspend disbelief if you are to enjoy The Lucky One. The key theme of the story, as already suggested by its title, is about Fate and Destiny, big and convenient themes for any storyteller to force everything down your throat. Logan is lucky to survive many battlefield engagements when the rest of his platoon mates don't, and in true blue needle in a haystack moment, tracks down one blonde girl amongst millions of coalition forces troops, where anyone could have dropped a photograph like that. But you have to believe that with American forces being the predominant coalition make up that the girl has to be American, and posing in front of a generic lighthouse would make it easy for it to be googled.

Once you can accept that, then it's the usual boy meets girl, girl thinks him having walked all the way to find her is crazy, but they both find common ground, especially since the guy is innately sly in working his way to her heart through her young son Ben (Riley Thomas Stewart). In what would be a little bit different from the usual Nicholas Sparks characters is that these two potential lovebirds bring with them plenty of emotional baggage and involving an extended family of sorts. Logan is as jumpy as many Mid-East war veterans were reported to be when they return home, and still possesses this killer streak which he struggles to control as he assimilates back to civilian life, while Beth finds herself still stuck in a relationship rut, having divorced her husband Keith (Jay R. Ferguson) the county sheriff, but yet still under his sphere of influence for fear of losing joint custody of her son. It makes it a little worse when Keith happens to be the son of a judge, so Beth does have plenty of inferiority complex to overcome.

That's where you find love being the opportunity and bridge for these two to find each other, and as with the grand scheme of things, love makes you become somewhat fearless, as we see how these two conquer the obstacles placed in their paths, and turn out to be better people. As with any typical romance films there really isn't a true out and out villain as Sparks also provides a sympathetic point to Keith, with redeeming qualities and a chance for that redemption to turn into action. Just as you thought things would run its natural course, I suppose this expectation, coupled with the slow pace at how things develop, made The Lucky One look very much like The Boring One. Scott Hicks felt like he was directing this on autopilot, not keeping an eye on the clock, allowing scenes to overstay their welcome especially parts from the mid-section, and managing to suck the romanticism out of what's supposed to be tender, romantic moments between the lead characters.

Many of us would see Zac Efron as that alpha male who's lively to a fault and full of zest, or at least that's what his public persona to date would suggest, but he somehow managed to sedate himself and put on his best blank expression throughout the movie, so credit to him for that. Taylor Schilling looked like she's overawed to be in a production such as this one, although a turn in character toward feistiness made her a little more interesting than one suited to wallow in self-pity. Together the two leads made it just plausible enough to believe they were made for each other, although the more interesting scenes tend to happen when they are not together, which says a lot. Blythe Danner as Beth's mom perhaps had some of the best lines in the film, being the wise and cool head in a film with plenty of running emotions, while Riley Thomas Stewart unfortunately was just another forgettable child actor playing an equally forgettable child character.

Still, the Nicholas Sparks branding will likely pull couples looking for their next romantic genre flick fix into the cinemas. Just don't come to expect too much from an established formula, and find some other distraction while the middle of the movie sags under its own weight.

(Needs to breathe with a little more heart and soul) 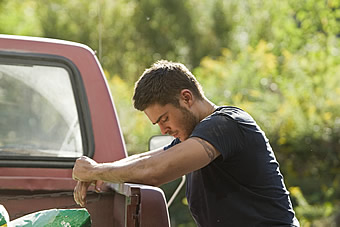 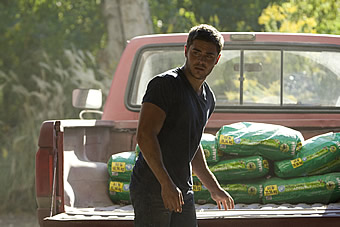 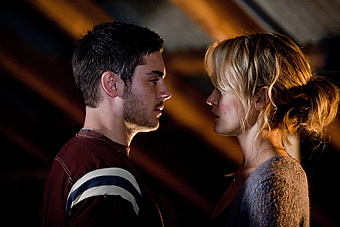