Synopsis: In the early summer of 1956, 23 year-old Colin Clark (Eddie Redmayne), just down from Oxford and determined to make his way in the film business, worked as a lowly assistant on the set of "The Prince and the Showgirl". The film that famously united Sir Laurence Olivier (Kenneth Branagh) and Marilyn Monroe (Michelle Williams), who was also on honeymoon with her new husband, the playwright Aurthur Miller (Dougray Scott). Nearly 40 years on, his diary account The Prince, the Showgirl and Me was published, but one week was missing and this was published some years later as My Week with Marilyn – this is the story of that week. When Arthur Miller leaves England, the coast is clear for Colin to introduce Marilyn to some of the pleasures of British life; an idyllic week in which he escorted a Monroe desperate to get away from her retinue of Hollywood hangers-on and the pressures of work.

I had to constantly and consciously pick my jaw from the ground and close my gaping mouth shut, as I could have sworn the real Marilyn Monroe was on screen in My Week With Marilyn, a biography film that doesn't attempt to tell the sultry actress' entire life from birth to untimely death, but gives one specific insights into the actress and well known sex symbol's demeanour from the revolving around the set and production of her 1957 film The Prince and the Showgirl, directed and starring Sir Laurence Olivier. This biopic, directed by Simon Curtis is based upon the books and memoirs by Colin Clark, titled "The Prince, The Showgirl and Me" and "My Week with Marilyn", the latter of which speaks of the missing week in the former.

As the story goes, Colin Clark (Eddie Redmayne) tries so hard to enter the film industry in any way, that he ended up as a lowly production assistant given the fancy title of 3rd Assistant Director, but in effect is the errant boy equivalent. And what a moment for any fanboy when your job has you share the same breathable air as your idol, which in Colin's case is Marilyn Monroe (Michelle Williams), newly married to Arthur Miller (an almost unrecognizable Dougray Scott) and is spending her honeymoon in London, in tandem to shooting her first film with Laurence Olivier (Kenneth Branagh). But the production is anything but smooth for Marilyn's shenanigans on set that drives Olivier insane, with her method acting techniques of unsuccessfully getting into character, her confidante and acting coach Paula Strasberg (Zoe Wanamaker) interfering much to Olivier's frustration, and her constantly being late on set, amongst others.

But before you jump the gun and exclaim "Prima-donna", it is here that Adrian Hodges' screenplay shines. It's easy to generalize through sweeping presumptions that here's probably the world's most recognized woman throwing her tantrum and weight around, given that she has the whole male population of the world eating out of her hands. My Week With Marilyn paints a more complete picture of a terribly complex woman, who on one hand has to deal with the insane popularity of her dumb blonde persona which she created and can carry with aplomb, while on the other having to handle insecurity issues, mistrust of people around her who are within reach of exploiting who she is and what she can bring to the table, and just about struggling to constantly seek reassurances from others, living to her own high expectations, while remaining contractually bound to the studio and star system. Episodes in Simon Curtis' film brings out this extremely layered picture
painting a never before seen portrayal not of Marilyn Monroe the icon, but Marilyn Monroe the tragedy.

And bringing her to life is Michelle Williams, who disappears totally into her role, thanks to the filmmakers pulling out all the stops to engage various coaches to ensure that her voice, and right down to her movement, paid off in terms of authenticity, making it vividly believable that it is Marilyn herself who's on screen. Never for once it copped out using flashbacks, stock film footage and the likes obtained from archives; everything up there on screen is pure Michelle Williams being immersed in the character, and she rightly deserves all accolades coming her way for mimicking to perfection a Hollywood icon, delicately balancing Monroe's predatory and vulnerable moments, sparkling to life when showered with attention, withdrawn and aloof when she feels vulnerable with her medicines as her crutch, and giggly like the attractive girl next door when able to be herself without the pressures of living up to the weight of expectations brought about by her
success.

It is the game Marilyn Monroe inevitably plays that makes this film such a compelling watch, where males will constantly question what would they do if the world's most recognizable woman was to want to spend quality, private time with you, which in some ways is what Colin Clark's kiss and tell account is all about. Those interested in film production will treasure the moments of what went on behind the scenes of The Prince and the Showgirl, with Kenneth Branagh in his element mimicking the ever so exasperated Sir Laurence Olivier in what would be a contrast of, in a keen observation by Colin himself, an actor wanting to become a star, with that of Monroe's aspirations of a star wanting to become an actress, making their pairing absolutely near impossible to work out, yet it's precisely because of their opposites that made it an irresistible attempt to do so.

Film buffs who enjoy the making of films, will enjoy all the little behind the scenes process moments in My Week with Marilyn, with key scenes reenacted complete with its fair share of bloopers, the reviewing of rushes and the likes all finding their place in the movie. And you can tell that the supporting ensemble cast members of Toby Jones, Dominic Cooper, Judi Dench and Julia Ormond all had a field day playing renowned personalities from yesteryears. The other minor subplot involves Colin's on-off romance with a wardrobe assistant (played by Emma Watson) that pales in comparison to that of the time spent with Marilyn, but offers good contrast in how something that's relatively grounded in reality, pales in comparison to fantasy no matter how fleeting that opportunity is.

If anything, this film will spark renewed interest in all things Marilyn Monroe again, especially in revisiting The Prince and the Showgirl, and perhaps picking up Colin Clark's actual books to delve a little more deeper into his account of an unforgettable, magical week. Highly recommended! 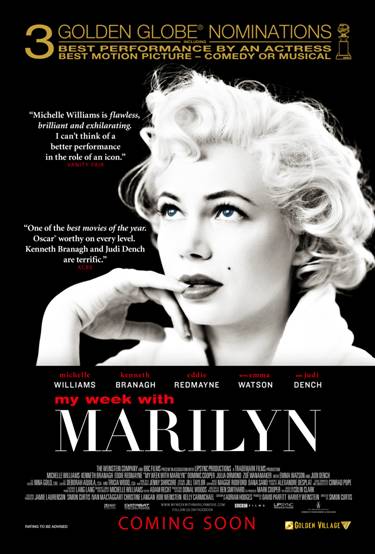