Synopsis: From director Steven Spielberg comes “War Horse,” an epic adventure for audiences of all ages. Set against a sweeping canvas of rural England and Europe during the First World War, “War Horse” begins with the remarkable friendship between a horse named Joey and a young man called Albert, who tames and trains him. When they are forcefully parted, the film follows the extraordinary journey of the horse as he moves through the war, changing and inspiring the lives of all those he meets—British cavalry, German soldiers, and a French farmer and his granddaughter—before the story reaches its emotional climax in the heart of No Man’s Land. The First World War is experienced through the journey of this horse—an odyssey of joy and sorrow, passionate friendship and high adventure. “War Horse” is one of the great stories of friendship and war— a successful book, it was turned into a hugely successful international theatrical hit that is arriving on Broadway next year. It now comes to screen in an epic adaptation by one of the great directors in film history.

I have to admit I haven't been impressed by Steven Spielberg's form of late, especially not since his last Indiana Jones installment was nothing but going through the motion, lacking that sense of fun filled adventure his earlier works had endeared him to audiences worldwide. 2011 proved to be that return to form. showing his hand at the grandeur epics he used to helm effortlessly, with Tintin showing the way, and War Horse sealing the deal for a successful year.

Based upon the children's novel by Michael Morpurgo turned successful stage play of the same name, War Horse is Spielberg's first foray into the settings of World War I, having had a number of his films deal with WWII, from the settings of the Indiana Jones franchise, to more adult oriented fare like Empire of the Sun and Schindler's List. For war movie junkies, War Horse has no lack of the essence of what The Great War was about, with Spielberg deftly handling without deliberate flamboyance the horrors of what the technological turn of the century had brought. It equalled in its war scenes what the director had done with Saving Private Ryan to put the audience right there amongst the harrowing battles, be it face to face with a tank, riding amongst a charging calvary, being deep in trenches and the threat of being mowed down by machine gun fire, or gas.

But war material aside, War Horse is essentially a powerful tale about the friendship between a young, powerful horse christened Joey, and his owner Albert (Jeremy Irvine), whose father (Peter Mullan) had bought the animal in a market out of pride when he needed a work horse to plough the fields, not a thoroughbred. The first act set in the countryside is everything a family friendly drama can offer, dealing with friendship and perseverance and having elements of training that Joey will take along with him when he gets forcefully sold to the army with World War I, having to rely on everything taught to take him through both sides of the war in the British and German armies, and moments of reprieve when not tasked at the forefront of battles.

Narratively the second half is what provided War Horse its sense of epic adventure as Joey's owners change quite frequently during that four year long war duration, and each episode has enough legs to carry its own film, condensed into little vignettes full of characterization for each of the players involved, ranging from the compassion shown by soldiers from either side that save it from certain death, to that of an old man (Niels Arestrup) and his grand-daughter (Celine Buckens) whose idyllic lives get rudely interrupted when soldiers plunder. These episodes enrich the story and is chock full of humanity, and are what provided War Horse its heartfelt moments many times throughout the film. One of my favourites involves a moment of peace amongst the chaos and insanity of war, where enemies put aside their untold differences to get a joint goal accomplished, laced with light-heartedness that's so longed for when death and weariness set in for the characters.

The star of the film is inevitably the group of horses that took various turns at playing the titular stallion, with that hint of CG introduced for more complex shots required. Spielberg is that master manipulator in knowing just how to frame scenes for maximum emotional impact for the horse, putting us side by side with Albert as joint-owners for Joey's well-being, from the time he gets trained to the time he had to leave the comforts of home for the horrors that war would inevitably bring. We become like protective parents of a child we see grow up, and from then on root him along the way to overcome various adversities and hardship just so that he can be reunited somehow, someday with his owner. The strong ensemble cast that come and go at various milestones of Joey's remarkable journey also made it a delight to sit through.

WIth Spielberg's usual suspects of John Williams, Janusz Kaminski and Michael Kahn providing that sweeping, powerful score, lensing those vast, beautiful landscapes and keeping everything solidly tight, this is good old fashioned epic filmmaking at its very best, and is clearly, undisputedly highly recommended to close 2011 with. Don't miss it! 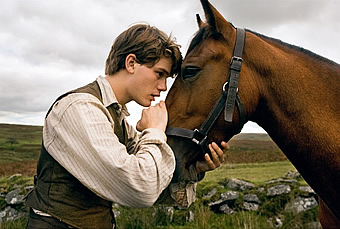 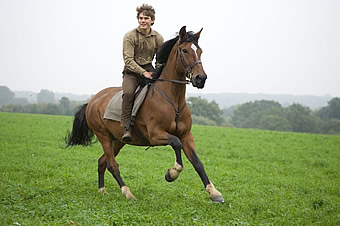 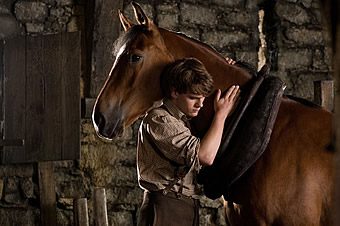 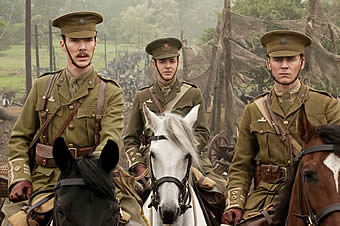 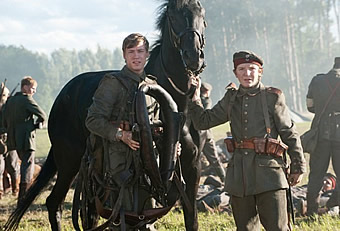