Synopsis: The 3D, CG-animated family comedy Arthur Christmas, an Aardman production for Sony Pictures Animation, at last reveals the incredible, never-before seen answer to every child's question: 'So how does Santa deliver all those presents in one night?' The answer: Santa's exhilarating, ultra-high-tech operation hidden beneath the North Pole. But at the heart of the film is a story with the ingredients of a Christmas classic - a family in a state of comic dysfunction and an unlikely hero, Arthur, with an urgent mission that must be completed before Christmas morning dawns.

There are numerous Christmas related films lined up every year once the season is round the corner, and this also spells familiarity with the respective family friendly themes that such films will inevitably touch upon. From comedies to animated films, you would think that you had seen them all, until such time when something brilliant like this Sony Pictures Animation and Aardman Animations collaboration that blows its contemporary peers out of the water.

Most of us will be familiar with the level of wit that a typical Aardman Animations film contains, being better known for its Wallace & Gromit stop motion films that are personally a joy to behold. Ventures into animation for the big screen isn't something new since it had dabbled with the medium through Chicken Run and Flushed Away, with this Sarah Smith directed movie being that first venture with Sony Pictures Animation that showcased its capability very convincingly, in blending what seemed to be tired themes dealing with family ties, perseverance and doing what is right, with a boost of modern day technical sensibilities to produce a smart narrative to entertain adults, and keeping children entertained through its vivid animation.

James McAvoy voices the titular character Arthur, the clumsy son of the current Father Christmas Malcolm, who had spent the last 70 years delivering presents to children all over the world in under 12 hours. But being the son of Santa Claus (Jim Broadbent) doesn't automatically mean a cushy job in the North Pole. Arthur gets mail room responsibilities replying to letters on Santa's behalf thanks to his innocence and earnestness, with his simpleton ways seen seen as a hindrance to the largest parcel delivery operations in the world, automated and drilled by his brother Steve (Hugh Laurie) to a perfectly rock solid, seamless outfit consisting thousands of elves under his command from mission control, to outfield troops, making Santa himself in a way, quite redundant and nothing more than a figurehead.

I have to tip my hat to the filmmakers for the fantastic introduction in the first act showing just how worldwide delivery is remotely possible with Santa's helpers running the critical operations, as well as owning a state of the art, never before seen Santa 1 space craft that has to be seen to be believed for its sheer capability alone. So now you know the secret how Santa Claus manages to get everyone's presents to the respective deserving kid in an on time, guaranteed fashion, and expecting to take over the helm with his father's retirement, Steve is only left to be disappointed when he gets overlooked for the job since, well frankly, he made it all too easy now.

The crux of the story deals with how technology is prone to that occasional lapse no thanks to human side error, and it's left to humans still having common-sensical values and basic decency to pick up from that failure, and make the necessary correction rather than to accept mediocrity and to sweep failures under the carpet. A stray undelivered bicycle becomes the object of obsession for Arthur and Grandsanta (Bill Nighy) to get to Gwen (Ramona Marquez) in a small English town before she wakes up in less than 2 hours, in an unauthorized mission accompanied by Grandsanta's aged old reindeer and gift wrapping elf Bryony (Ashley Jensen) who always threaten to steal the show right from everyone's noses. Needless to say most of the minutes spent in this film gets focused on this rag-tag group in their adventures on an iconic sleigh pulled by reindeers the traditional way, and slowly exposing just how everyone jumped onboard with their own agenda, only to
realize that Christmas itself is larger than any of their selfish reasons.

While there are plenty of sight gags and wordplay to tickle your funny bone, the A-list voice cast also played crucial roles in fleshing out and providing real world emotions to their animated characters. Peter Baynham and Sarah Smith's story nailed the moral education values of this film with the right amount of balance without feeling forced, emphasizing that arrogance tend to lead to complacency, and the losing track of what actually mattered in the first place, as seen in those whose tasking on Christmas day is made easy through technological advancement, compared to those who prefer to continue keeping the day itself memorable for kids everywhere, and have to tackle insurmountable odds and dangers to get things right.

Arthur Christmas has that strength of heart which makes it stand out, and entertaining family friendly films will find this a tough nut to crack this holiday season. Highly recommended!

(Arthur Christmas shows us why 'tis the season to be jolly) 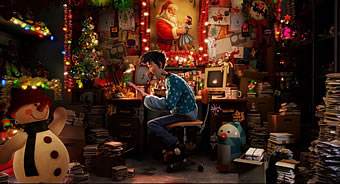 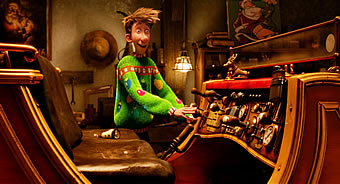 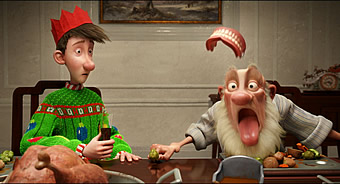 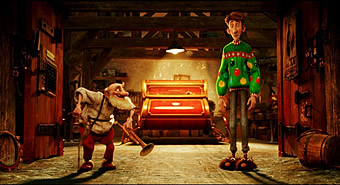